The jewelry designer hosted her celebrity pals at home to celebrate her first ready-to-wear collection. 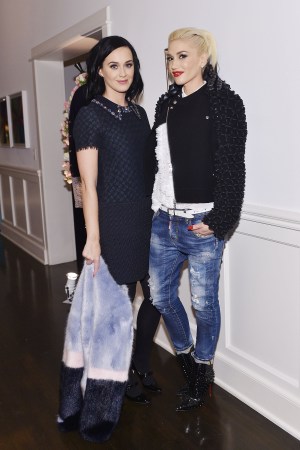 “The good news is I gave some Champagne to my next door neighbors, so people can stay as late as they want,” Jennifer Meyer said, while standing in the doorway of her and husband Tobey Maguire’s Brentwood residence on Wednesday night. “I mean, I have to be up around six a.m,, but I’m just going to go as long as everybody wants to.”

The jewelry designer welcomed guests into her home for a backyard garden party to celebrate her fall ready-to-wear capsule collection “Barneys New York XO Jennifer Meyer,” created to commemorate her 10-year anniversary with the store. “Barneys started my business. They took a chance on me,” Meyer said, adding that she was tickled to be asked to do a clothing line. “It was as if the heavens opened and angels started singing….I never want to do stop doing jewelry, but this is a really exciting extension.” When asked if another collection could be in the future, she replied, “I’ve sort of got the bug.”

Meyer said she “wanted people to feel like it was a fun hangout,” and it was for Jennifer Aniston, Leonardo DiCaprio, Katy Perry, Gwen Stefani and Blake Shelton, Scott Eastwood, Courteney Cox, Dakota Johnson, January Jones, Molly Sims, Kelly Rohrbach, Chelsea Handler, Kris Jenner and Corey Gamble. The 12-piece collection was featured on mannequins in the foyer, then attendees made their way through the house and outside where a Parisian theme awaited them. Plush pink couches, white chairs, mirrored coffee tables, trees strung with chandeliers and pastel flower arrangements by Eric Buterbaugh made for an Instagram-worthy scene.

“Hi! How are you?” said Maguire, dutifully greeting guests. He was later joined by pals DiCaprio, Kevin Connolly and Lukas Haas while his children Otis and Ruby excitedly ran about and eventually settled on a couch next to Disney star Debby Ryan.

The SheJ — aka stylist Nikki Pennie — provided tunes such as The Weeknd’s “Can’t Feel My Face” while guests noshed on catering by Animal’s Jon Shook. Perry and Aniston huddled inside by the fireplace chatting, and later in the night, while posing for photos with Cox and Meyer, Aniston laughed, “She told me to stand up straight,” pointing to Meyer.

“Hey girls! Katy Perry!” Nicole Richie called out from across the room. Perry soon came over and they posed together in the party’s photo booth.

“Sorry, did I get in that?” asked Shelton, as Stefani and friends posed together. Stefani proved eager to introduce her new beau to pals. “Have you met Blake?” she asked Buterbaugh.

Elsewhere, DiCaprio — dressed in a newsboy cap and jeans — stopped by the buffet, then joined his guy friends at a dining table, while Handler and Jones caught up on a couch.

The last time the house got this much action was back in June. “We did an event for Hillary Clinton here which was amazing and that was the first time we opened our home,” Meyer said. “There are certain times where it just feels right to bring people in. I guess I could have done it at a hotel, but why not here?