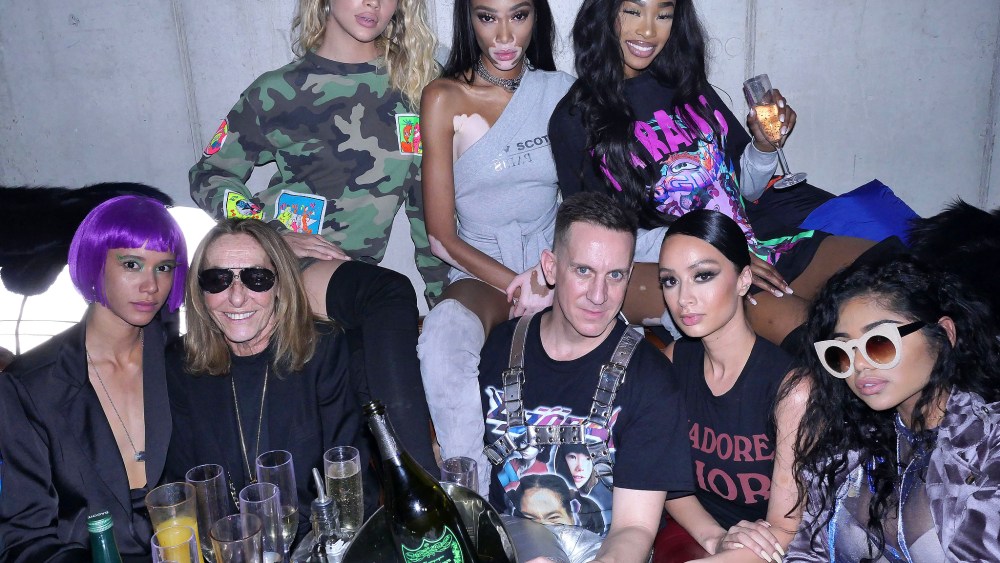 It’s not a Jeremy Scott party if there isn’t some combination of sweat and neon.

Following Scott’s show on Thursday night, Public Arts took on the form of the Eighties New York skyline — in neon lighting. At the door, light up shutter shades were passed out like some kind of survival kit. The few who got them held on to them fiercely as they drank, danced and competed against one another in rounds of “Dance Dance Revolution.”

The party was held in celebration of Scott’s latest collaboration with MAC Cosmetics. Inspired by Eighties New York, Nineties supermodels and “just about anything else related to music,” the collection consists of eye shadows, blushes, bronzers and lipstick palettes, all of which come in either boom box, mix tape or CD packaging. In keeping with the Eighties and music themes, Scott had selected Ssion, a musical act from his home state of Kansas, as the headliner, with Sita Abellan holding court at the DJ booth immediately after.

As VIPs like Kehlani, Keke Palmer, Serayah, Jasmine Sanders, Dilone, Carlyne Cerf de Dudzeele, Jackie Cruz, Winnie Harlow, Draya Michele and the man of the hour — clad in a metallic harness — trickled in, Ssion screamed and gyrated on the stage next to dancers wearing high-cut bodysuits. The performance culminated in a loud boom: an explosion of red metallic confetti that was like a spiritual experience for the young ravers on the dance floor.

Upstairs, in the private VIP room, Palmer and Serayah chatted by the bar. Palmer said she had missed Scott’s show due to rehearsals for her upcoming appearance on MTV’s “Wild ‘n Out.” Her fashion week schedule is show-heavy, and though she’s eager to see new designs, she’s more focused on what her peers are wearing.

Downstairs, in a roped-off section where Dilone, Harlow and Sanders pouted for the camera, Scott stepped out of bounds to pose for selfies with fans — and answer a question about the show.

“I actually haven’t seen it ’cause I was working the whole time on the clothes, but I’m very, very grateful for everyone’s enthusiastic reaction,” he said. “I haven’t actually watched anything — I got only that one second after Gigi [Hadid] went out. I got to watch that moment, which feels great, but it’s a blur.”

Shortly after, Christian Combs waded through, trailed by what seemed to be a video crew. Dusting the dance floor with his long, fur coat, he held a microphone and started talking into it for the camera.

At New York Fashion Week, the young and famous are never truly off-duty.