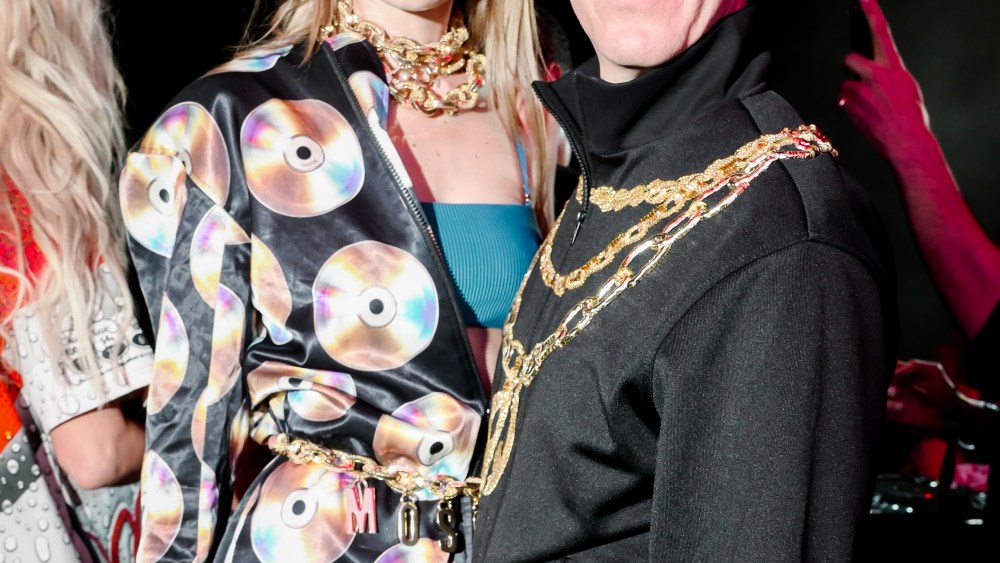 It would be a tough act for anyone to follow the reunion of Destiny’s Child — even Jeremy Scott.

High off Beyoncé’s performance and one of the most popular acts of the Nineties, guests largely came sauntering in late to the Moschino party in Coachella at the Corona Yacht Club. So late in fact the big announcement of the designer’s collaboration with H&M, due out in stores and online Nov. 8, was held off by an hour and then another half an hour to ensure those watching Beyoncé had time to make it to the 20-acre property.

“Myles!” Delilah Belle Hamlin and Amelia Grey Hamlin exclaimed with crew in tow running in unison toward Myles O’Neal, son of Shaquille O’Neal, to say hello with big hugs before posing in front of the giant letters spelling out Moschino.

Inside the compound, attendees meandered around the two-acre freshwater lagoon, noshing on French fries, spicy fried chicken, hamburgers, and Momofuku and Milk Bar truffles, while sipping the vodka soda and vodka cranberry drinks. Meanwhile, screens on the property blared the “Please Stand By” TV announcement twitched and flickered to the beat of the music.

“The announcement’s coming,” said one attendee excitedly as she flipped on her phone and the time clicked closer to 1 a.m. “F–k, six minutes.”

Of course, 1 a.m. came and went as stragglers from Coachella Valley Music and Arts Festival came in. It wasn’t until roughly 1:30 when Hadid finally appeared on the screens, barely audible, to help Scott with the big reveal before the night erupted into a major fest as more and more cars flooded the entrance at nearly 2 a.m. to drop off more people just waiting to get the party started.

Around that time, Paris Jackson, trailed by Sasha Lane, walked into the VIP area only to walk back out 10 minutes later — to her father’s “Billie Jean,” no less. Erika Jayne of “The Real Housewives of Beverly Hills” spun the beats at the DJ stage, where Hadid and Scott took pictures and danced.

Steph Shep, Kim Kardashian’s former assistant, took her turn shortly after, as did other influencers. The main crowd, it seems, had stayed at the festival to see Beyoncé through.