i-D throws party for Scott, who discussed his new film. 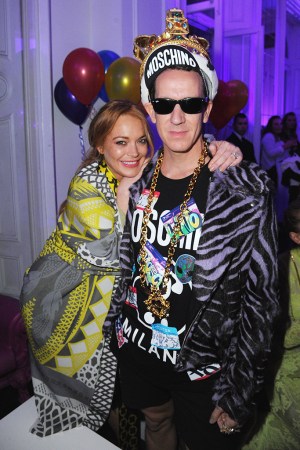 Jeremy Scott zoomed from Milan to London this week to celebrate i-D Magazine’s 35th anniversary — and its latest cover, where he appears alongside Bugs Bunny.

Over four floors at Il Bottaccio in Belgravia, and before a crowd that included Lindsay Lohan, Alice Dellal and Sam Rollins, Scott also premiered the trailer for his documentary “Jeremy Scott: The People’s Designer.” Produced by Matt Kapp, who worked on “Valentino: The Last Emperor,” the film highlights his first collection as creative director for Moschino and his childhood in Kansas City, Missouri. It features a host of his celebrity friends including Katy Perry, Rita Ora, Miley Cyrus and Jared Leto.

“It comes out September 18th, so that’s kind of now a lot of the focus. Today was a little bit hectic because all of a sudden everyone’s seeing the first glimpse of it, and it’s exciting with Katy, and Rihanna and Miley, and Rita Ora and lots of close friends who partook in it,” he said. “It’s a lot of what happened in a year and a half of my life, especially since it started just prior to the announcement that I was taking over the role at Moschino — so it has this whole moment of the first show, and everything and then we go back to where I grew up and all that, so there’s a lot in there.”

Scott said he wants people to feel inspired by his journey. “The main thing I hope people see is how passionate I am about my work, and I know people talk about it, but I do work really hard on my stuff and it means a lot to me,” he said, adding that he also wants people to know anyone can make it in fashion.

“Hey, I was born so dirt-poor that literally the church bought us our groceries, so it’s not like only people who have connections can work in fashion, so maybe I can be an emblem for that. You know, I grew up on a farm and didn’t have connections and I had a dream that I believed in, and I felt passionate about it, so if I can instill hope into somebody too with the film, that’s what I most want,” he said.

Scott said the film also reflects his particular sense of humor: “It’s a little tongue in cheek — that’s my role, my gift to the world, to try to bring a little bit of a smile.”