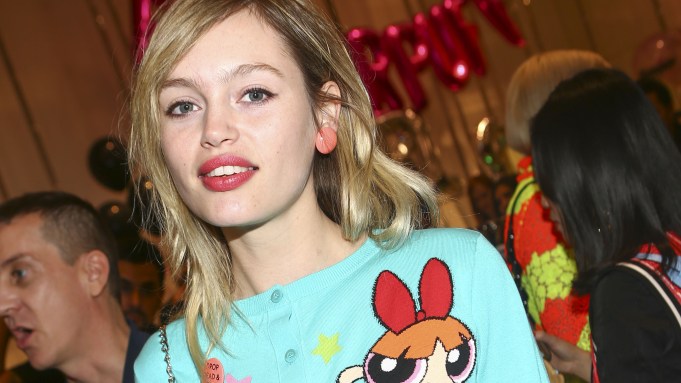 Jeremy Scott’s latest pop-culture infused collection for Moschino – this time with the animated trio The Powerpuff Girls – was cause for a fete on Thursday night at the house’s Los Angeles boutique.

“When I was working on the [spring 2016] collection I loved the girls and thought it would be a cute element to have them there,” Scott said of the Milan presentation where he first debuted the pieces. “I was actually floored that so many people were excited to see what I had done with them. I was just doing something that was fun and personal because I liked them and they’re cute. It was kind of like my own little world.”

The Cartoon Network, which this year is bringing the beloved franchise back on the air, helped amp up the already kitschy-fun vibe of the store with more pink Blossom, Bubbles and Buttercup-themed decor for guests Justine Skye, Serayah and Staz Lindes, who all arrived wearing the collection.

“It’s my favorite cartoon,” said Serayah. “Growing up, I had the video games and everything. When I heard about it I was like ‘Hell yes,’ this is where it’s at. I love it, it’s so fun.”

Skye had similar sentiments for the assortment of knit tops, skirts, dresses, swimwear and bags, saying, “I love that the collection is super fun. I grew up on The Powerpuff Girls.” When it came to her favorite character, Skye said, “My hair is purple, so I feel like I would be the purple one. I’m the missing Powerpuff Girl.”

Later in the evening, more devotees arrived to show their support.

“Hey love,” Scott said as Devon Aoki passed through the balloon-festooned entrance. The two shared a quick embrace, posed prom-style for cameras and fell deep into conversation near the snack station of colored popcorn, candy apples and Powerpuff Girl cookies.

“My friend Jeremy and I go back so many years,” Aoki said. “I’ve just been waiting for an opportunity to hang out with him because he’s so busy traveling the world and tonight was that opportunity. So I’m here to support and hang out with him, spend as much time with him as I can.”

Mia Moretti, who was just in for the night on her way to San Francisco’s 50th Super Bowl, added, “Any excuse to see Jeremy.” She also dubbed the cartoon trio as “the original girl gang.”

Earlier, Scott mentioned the spirit of the movement as an inspiration saying, “I’m very pro-girl power, but being a boy I’m always going to have a different relationship with it. I have it vicariously through the girls around me. I feel lucky to have that influence.”