Katy Perry, Rita Ora and other fans came out to the premiere of the documentary. 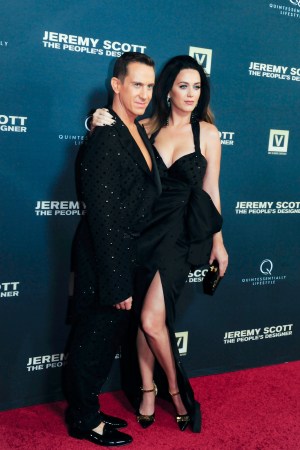 True to form, Jeremy Scott brought the stars and his signature tongue-in-cheek glamour to the Hollywood premiere of “Jeremy Scott: The People’s Designer” on Tuesday night.

“I wanted to go Old Hollywood so I’m doing a tuxedo, but with no shirt. It’s a topless tuxedo and I covered it with Swarovski crystals so it would sparkle and shine,” he said.

By his side was BFF Katy Perry, dressed in a matching gown. “We are twinning. I think that’s the word on the streets these days,” she said. “Jeremy is always so kind to let me borrow things, but I turn into a pumpkin at midnight.”

Cinderella and her prince still had some more gushing to get out of their systems before midnight.

“She’s the most beautiful pumpkin you’ve ever seen,” Scott said. “And she’s one of the most kind, generous people you could ever hope to have as a friend. To me, she is still the little girl who came up to me before her album came out in [in 2007] and told me that I was her favorite designer and hoped one day I would dress her.”

The documentary, from filmmaker Vlad Yudin, is populated with footage of the duo at the Costume Institute gala and the Super Bowl. Several of the other famous faces in the documentary also turned out for the premiere, including a Moschino-clad Rita Ora — who said her favorite thing about Scott is that “we’re both a bit wild, a bit crazy”; A$AP Rocky; China Chow; Liz Goldwyn, and Liberty Ross.

“Jeremy never got his true respect in the fashion world but he has a lot of real fans. People wear his stuff and follow him as if he’s a pop star,” Yudin said. “When pop culture embraces you, it’s way more powerful than any institution.”

Indeed, there were several young Scott-clad fans lining the barricades on Hollywood Boulevard hoping to get a glimpse of him. They had plenty of time to ogle because Scott and Perry also partook in the Tinseltown tradition of immortalizing their handprints in the cement in front of the TCL Chinese Theater — née Grauman’s.

“I am so honored to be the first designer to have his hands immortalized with all these stars I love,” Scott said.

Inside, the audience erupted into applause after the film, and Perry, who brought tissues, said, “Everything with us is very natural. You can call it a muse but I think it’s a bond and a friendship. Plus, I like when people go against the grain and are a little bit of the black sheep.”

Afterwards, a select group made its way across the street to the Roosevelt Hotel penthouse for the after party, including Dita Von Teese, Tinashe, Vanessa Hudgens and Rosson Crow.

“I mean, I loved Jeremy before, now I really fell in love with him,” gushed Lily Collins. “What other designer is so lovable and so fun?”