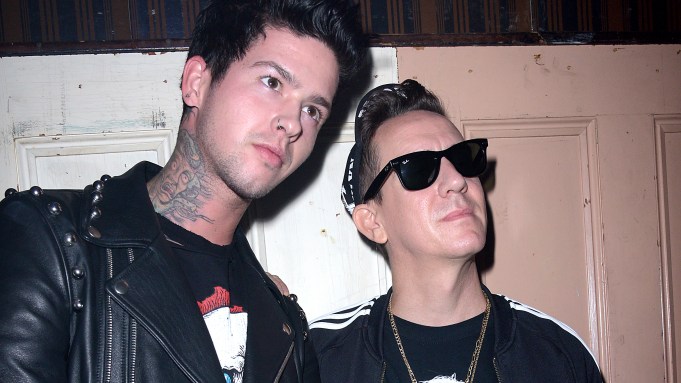 The Jeremy Scott after parties are one of the most notorious during the week for those who revel in seeing and being seen — and Monday’s bash at Flash Factory was no exception. Booze was flowing as strobe lights shined onto a colorful mosh pit of the designer’s fans moving on the dance floor to hits DJ’d by The Misshapes’ Leigh Lezark and Geordon Nicol.

“I’m excited,” Lezark said about the night. “It’s always a really fun party and all the people that come out for him are so much fun.”

Many of the after party attendees modeled their looks for the night after Scott’s “slime city.”

“It’s all Jeremy,” said Caillianne and Samantha Beckerman in unison, in regards to the matching Jeremy Scott hoodies they donned for the evening. “Jeremy inspires us for everything. His creations exude so much positivity and happiness and you can really feel it through his clothes. Not only does it make us happy, but it makes everyone else around us happy, too.”

As models smoked cigarettes in the VIP section alongside drag queens and socialites, one fashion girl shrieked as a drink spilled on her “very expensive” bag. Clearly, Scott has a way of bringing in every kind of clubgoer.

“I thought about Jeremy and a safari,” said a fan as he looked toward the leopard print suit he was rocking on the dance floor.

Singer Bebe Rexha was also in attendance to show her support for the designer. “I love Jeremy because he’s so eclectic and creative and I love his new collection,” she said wearing a white blouse with over-the-top sleeves. “I got this from a random designer and I was, like, I’m going to f–king wear it and if I’m going to wear it anywhere, it’s going to be a Jeremy Scott after party.”

The party kept on roaring as Scott himself made his anticipated entrance, wearing sunglasses indoors like any designer would do. “I am feeling relieved that it’s over. It’s always good to have fun with your friends and have a good time,” he said.