Jerry Hall flew into her hometown of Dallas with husband Rupert Murdoch. 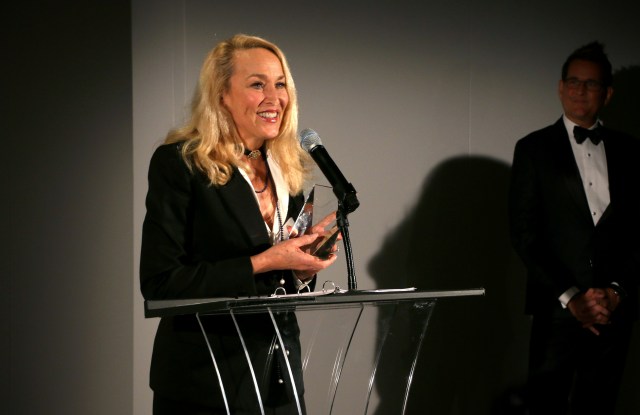 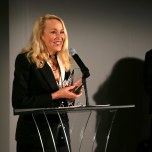 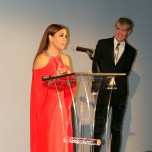 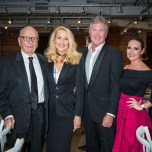 DALLAS — Jerry Hall left behind a boyfriend by the name of Murdoch when she moved to Paris as a teenager and she recently returned with another Murdoch — her husband, Rupert.

The power couple flew in for Fashion Group International of Dallas’ Night of Stars, where Hall received an accolade for lifetime achievement. The dinner for 300 was held at Fashion Industry Gallery to benefit FGI Dallas’ scholarship fund.

“It means so much to me to receive this award in the town that I’m from,” Hall said from the podium. “And I love how you support young people.”

Wearing a fitted Yves Saint Laurent jacket and Ralph Lauren skirt, Hall said she began modeling at age 14 at the Dallas Apparel Mart and Neiman Marcus. Two years later, the leggy blond was off to Paris with a sleeping bag and a backpack stuffed with frocks her mother had sewn.

“She had copied all of these wonderful Frederick’s of Hollywood gowns — they were snakeskin and leopard and satin with dolman sleeves,” Hall recalled. “And she got me some feather boas from the Mesquite Sewing Center. It was a huge success. Before I knew it I was on the cover of Vogue. People said to me, ‘Fashion is a short, fickle business — five years if you’re lucky.’ But I’m here to testify that it can be a wonderful career.”

Indeed, this year marked the 20th anniversary for Monique Lhuillier, who received an award for career achievement.

Ken Downing, senior vice president and fashion director for Neiman Marcus, presented the trophy, noting the bridal and eveningwear designer has a long list of celebrity clients and produces everything in her workshop in Los Angeles. “I love Monique because she makes beautiful clothes for beautiful women,” Downing affirmed.

“It’s hard to believe that 20 years has gone by when every day you do what you are passionate about, so to stop and reflect has really been amazing,” Lhuillier said.

Among the people she thanked was her husband, company chief executive officer Tom Bugbee.

“We work together every day, which can be challenging at times, but it’s been an amazing ride,” Lhuillier said. “So cheers to the next 20 years, and I hope to see you all again.”

The group also surprised outgoing regional director Chuck Steelman with an award for outstanding service. Steelman, who is special events manager in corporate public relations at Neiman’s, elevated the event over the past five years by honoring internationally known designers and celebrities in addition to Dallas talent.

The benefit raised record funds thanks to Nancy Rogers’ impromptu offer of $100,000 in matching funds, which inspired pledges for more than that. The wife of Mary Kay cofounder and heir Richard Rogers, she is one of the city’s leading philanthropists and one of its best dressed.

FGI Dallas annually presents $50,000 in scholarships to fashion students, and that number may well rise next year given the unexpected windfall, Steelman noted. The board is also investigating using some of the money for an endowment for future scholarships, he said.