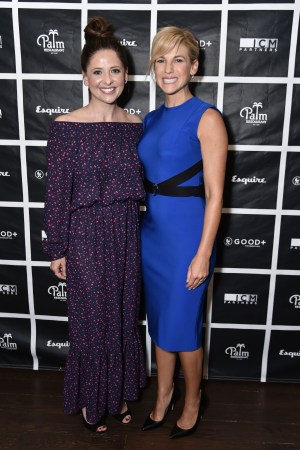 On Wednesday afternoon, The Palm Beverly Hills closed its doors to the public to privately welcome Jessica and Jerry Seinfeld back for their second annual Los Angeles Fatherhood Lunch in support of Jessica’s Good+ Foundation, formerly known as Baby Buggy.

A rather dude-heavy crowd piled in for 14-ounce steaks and the opportunity to use their celebrity for a noble cause, Judd Apatow, Dan Bucatinsky, Bob Saget, Michael Richards, Rodger Berman and Cody Horn among them. “I know a lot of people here,” Horn said of the event. “It feels like a family affair, especially with Jessica and Jerry, I’ve known them for a long time.”

The familial spirit also matched the charity’s theme of rebuilding underprivileged families with supplies and engaging fathers, as told firsthand by one of the organization’s participants, Joseph Murphy, and via a video sharing stirring statistics of poverty.

There was also a speech from Jerry Seinfeld that naturally turned into stand-up.

The comedian mused, “Now, there’s a lot of annoying words and phrases that people use at these things like, ‘giving back’ is very popular. I’m not a fan of giving back because I didn’t take anything. I believe in just giving.”

The father of three also shared his thoughts on the positive effects of “Dadness” using The Golden State Warriors point guard Stephen Curry as an example. “I was talking to Chris Rock the other day about Stephen Curry, and everyone is just in awe of what this guy is doing at this moment. He was telling me about [another basketball player] whose name I will not mention, who had similar talent but was much more fragile. Chris says to me, ‘Stephen Curry is the same guy, [but] with two parents.’ That was powerful. He’s right. That’s a very powerful unit.”

After Seinfeld’s call to action for donations, his wife echoed the importance of a two-parent home saying, “Maybe this father deserves a second chance at being a part of his child’s life. If you can get a parent to be involved with their child who wasn’t involved before, I mean, I feel like that does something for our country.”