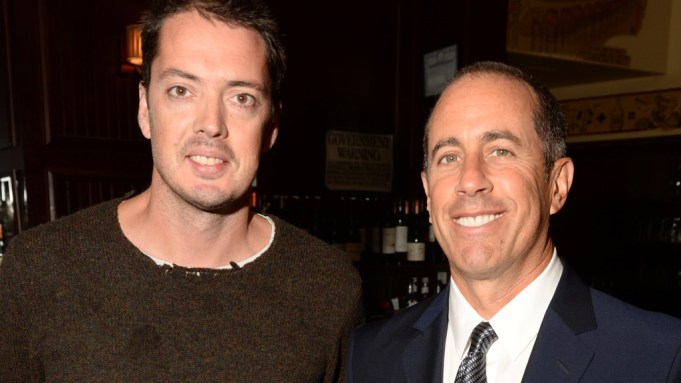 Jessica and Jerry Seinfeld called on a few of their closest friends — Hugh Jackman, Michael Strahan, Marcus Wainwright, Neil Patrick Harris, Mark Consuelos and Nigel Barker — to join them at The Palm restaurant in Manhattan’s TriBeCa on Tuesday afternoon for the launch of Baby Buggy’s latest project, the Fatherhood Initiative.

The event, which raised more than $200,000 and was sponsored by Gucci, Acura and Johnson & Johnson, marked a new chapter for the organization, which has recently expanded to highlight the role of fathers in the development of children and aiming to provide low-income dads with donations, goods and support services.

Seinfeld said she errs more on the side of disciplinarian with her three children, while her husband tends to up the playtime quotient. “He will play these weird games with them like ‘pillow mountain,’ where they pile pillows on top of our bed, and someone is definitely going to end up hurt and crying every time,” she said.

In addition to running Baby Buggy since 2001, Seinfeld has found a meta genus of celebrity: Instagram. (She recently posted a photo of Jerry receiving an at-home haircut, during which she made him wear a garbage bag to catch the snipped hairs.) Though Jerry uses Twitter, he has yet to join Instagram himself. “He’s talking about joining [to promote his Web series], ‘Comedians in Cars Getting Coffee,’” she said. “But I’m falling out of love with [Instagram] by the minute. I find the culture on it so grossly negative. It depresses me, actually, that people feel so entitled to give their opinions on how people look. A couple of my kids are on Instagram, but I watch every single movement. I’m so on top of it. They’re not even enjoying it because they know I’m reading absolutely everything they post.”

Jackman, who said he met Jerry Seinfeld while singing one year at the Met ball, took to his seat in the room full of suits. “You’ve gotta be spontaneous,” said the father of two on his parenting style. “Whatever ideas you have — no matter what books you’ve read — it turns out that most of it is not really useful. You’ve gotta be creative and patient. Being a parent is a way of keeping you really awake. If you’re stressed about something, kids have a way of bringing you back.

Jerry Seinfeld stood up for a brief speech before an emotional video segment on the charity initiative.

“A certain level of incompetence is OK,” Seinfeld said of what surprised him most about fatherhood. “It makes you cute. Women find bumbling fathers cute and attractive.”