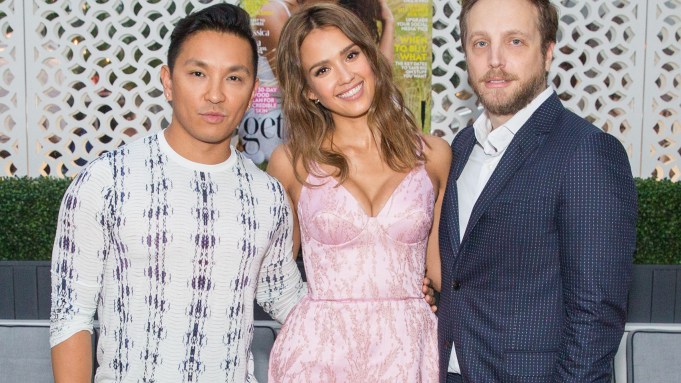 “I did everything,” joked Jessica Alba Thursday evening, overlooking the garnished tables from the terrace atop newly opened La Sirena in Chelsea. “I did the flowers, the table…”

Alba, who appears on InStyle’s July cover, was toasted by the magazine’s editorial director, Ariel Foxman, alongside designer friends including Prabal Gurung, Baja East’s Scott Studenberg and John Targon, and Jennifer Fisher, with cocktails and dinner at the Mario Batali hot spot.

“This isn’t my first cover, but we’ve actually just known each other going to shows all the time,” Alba said of InStyle and Foxman during the pre-dinner, martini-filled cocktail hour. “Sometimes editors can be intimidating, you know, but he’s really approachable and lovely.”

For the cover shoot, which features swimwear-clad tropical shots, Alba flew to Hawaii in April for a short visit that doubled as a birthday party. “It was before my birthday — I turned 35, as hard as that is to say — so I just felt like I should have a big celebration,” she said. “So my mom came and my girl friend Lauren, who does my makeup, came. Then for a couple of days, my girl friend from Canada came, so we had three days of just fun girl time.”

In addition to friends like Gurung, who Alba sat with during dinner and took selfies with throughout, she’d also invited beauty blogger Deepica Mutyala after a rather chance meeting a few months back. “I met her at my hotel bar, and she does all these red lipsticks under the eye things — she’s one of these really special makeup bloggers that talks about women of color, and gives tutorials from that perspective, using very unconventional things,” Alba said. “I’ve been following her on Instagram, and we ran into each other and I asked [if she wanted to come]. It’s nice to throw some girls with brown skin like us into the mix — and also, someone who is doing something different in the makeup blogger world.”