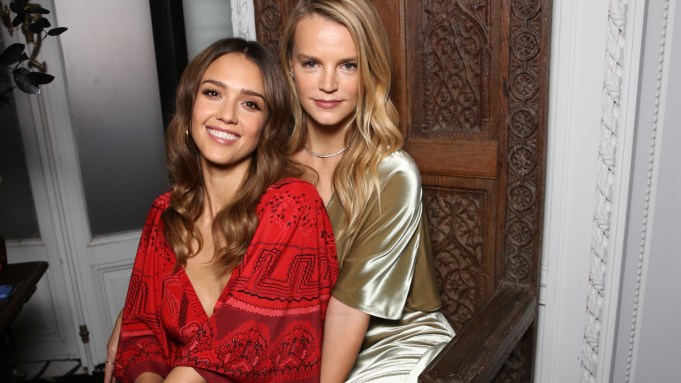 VALENTINO DELIGHTS: Jessica Alba, Demi Moore, Miles Teller, Lily Collins and Diane Kruger were some of the guests who attended the Valentino after party at a turn-of-the-century hôtel particulier at 51 Avenue d’Iéna in Paris on Sunday night hosted by creative director Pierpaolo Piccioli. It had a “The Garden of Earthly Delights” theme, referencing the triptych painted by Hieronymus Bosch that was among Piccioli’s inspirations for his spring collection.

Tables were laid with floral displays reminiscent of the Renaissance and hundreds of candles. Next to a fireplace and mirror, Christian Louboutin was chatting with rising French actress Diane Rouxel. “I cannot wear your shoes. My feet are too small. I am a 4.5,” she lamented.

The actor, who took in the Valentino show earlier in the day, is to appear in boxing film “Bleed for This” with Aaron Eckhart slated for a November release. “It will be like an award season kind of a thing. We went to Toronto. It’s a true story about a boxer who broke his neck in the middle of his career and they say you’ll never box again, you might never walk again so he has metal in his head and he starts working out with metal in his head against doctor’s order and risking paralysis and a year later he comes back and wins the title,” he said. “I got in pretty good shape [for the part],” he added with a laugh.

He appears in two other films next year: “Granite Mountain” about a couple of firefighters with Jennifer Connelly and “Thank You for Your Service” about soldiers returning from war, produced by Steven Spielberg. “We don’t know how to bring soldiers back from war,” Teller complained.

On the fashion front, Teller favors a pair of jeans and a Grateful Dead T-shirt.

“But he dresses up, he dresses up,” Sperry pointed out, flashing a smile at her boyfriend, who on Sunday was wearing a Valentino suit.

“We are going to Florence tomorrow… pretty early,” said Sperry, on her feet, dancing with Alba as the DJ changed the tune to The Human League’s “Don’t You Want Me.”

“Guys, we kind of succeeded, this is good,” Sperry said.