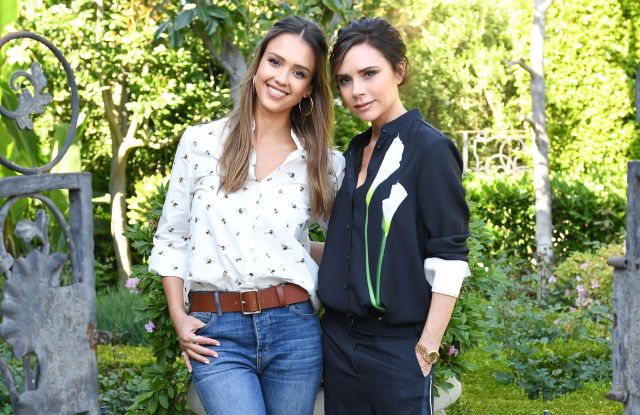 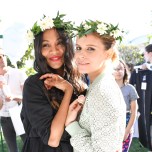 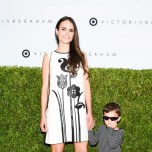 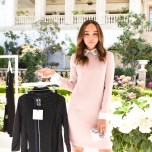 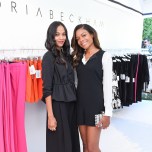 Held at Mohammed Hadid’s residence in Bel-Air, the party was full of English roses — both planted on the extensive grounds as well as printed onto the various pieces of apparel and in the flower crowns that guests could make.

“Today’s event is really celebrating me and Harper and Britain,” she said, referring to her five year-old daughter who served as the inspiration for the collection.

“I wanted to celebrate VVB, which is the other side to my wardrobe and I started working on VVB when I was pregnant with Harper and now they are both five, so now seemed like the right time to really celebrate the fun side to my collections. It’s also the first time I’ve done children’s clothes so it’s great to celebrate my relationship with her and the things we do together — whether that’s collecting flowers or walking to the park or reading books.”

Indeed, the youngest Beckham, a dead ringer for her father, was running around the party, shopping pieces for her friends and “babies” while older brother Romeo helped himself to the candy bar.

“I have boys, but they could rock this stuff,” said Saldana of the girls’ merchandise. “I mean, their parents are very metro.”

Alba, an avid Target shopper and vendor — her Honest Co. and Honest Beauty lines are both sold at the retailer — said she was excited to get pieces for her two daughters.

Others were shopping for themselves, like fellow Brits Naomie Harris and Ashley Madekwe. “When else do I get to wear a dress with a bunny collar?” Madekwe asked, while eyeing the actress dressed as a mermaid in the sparkling infinity pool. “Do you think we could ask these kids to move so we can get a photo with the mermaid?” she added.

There were myriad other amusements for children, including a paper bunny mask-making station, a necklace bar, trees hung with English rock candy, a red telephone booth photo booth and a storytelling corner.

“It’s just so nice when you can bring your kids to work with you,” said Beckham. “I’m a mum and I love to be able to include my family as much as possible. There’s so many fun things to do here.”

A mermaid made fast friends with the younger guests.  Katie Jones/WWD/REX/Shutterstock