The actress lent a hand to the drinking water non-profit in New York on Monday. 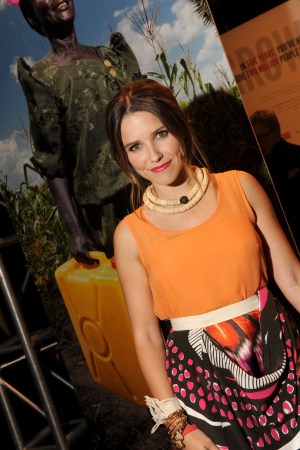 The 69th Regiment Armory’s squadron of tanks was moved onto Lexington Avenue in New York on Monday night to clear the way for the sixth annual Charity: Water Ball. Though stripped of its military decor, a few men in uniform were scattered throughout the entrance and outside, one or two leaning against the building’s exterior.

“It’s for Africa,” one said, indicating with his head the thick knot of would-be revelers who had formed a queue down the steps that snaked around the block. “It’s nice that people are giving to charities…and also that girl from that New Year’s movie and Valentine’s Day movie is here.”

This story first appeared in the December 14, 2011 issue of WWD. Subscribe Today.

It was true: Jessica Biel was there, playing the official hostess for the evening, though locating her inside the fete proved difficult and speaking to her even more so.

“If it happens organically, it happens,” Biel’s publicist explained, arms outstretched, nearly swatting Sophia Bush and Erin Fetherston. For her 29th birthday, Biel had asked friends and fans to donate $29 to Charity: Water, which aims to bring clean drinking water to people in developing nations. Her online fund-raising efforts raised $6,640.

“I’m just very thankful for everyone who came out to support, it’s such an important cause and people don’t really think…about how important it is. It’s a basic human right, clean water, or it should be,” Biel said from behind a row of empty cans that designated the “VIP area” as her publicist closed in, indicating it was almost time for the actress’ speech.

(“Tonight was the perfect mixture of thoughtfulness and levity,” Biel later wrote in an e-mail. “I was happy that we were able to raise a great deal of money for the cause through ticket sales and the live auction. Tonight I feel extremely honored to be part of the Charity: Water family.”)

The cavernous space was filled with people, empty jerry cans and scattered low-lying seating areas with tables at a perfect height for accidentally bruising shins. A “photo shoot station” provided partygoers with a brand-emblazoned step-and-repeat backdrop, professional lighting and a wind machine for prime posing, while a rectangular runway took the center of the space. Guests were encouraged to pick up two water carriers and walk the length of it, to imagine a common trek for some African children. A video of African families discussing their plight projected onto the far wall as the song “Africa” by Toto blared from the speakers.

Tyler Perry had made the trek up from Georgia to act as auctioneer for the event.

“It’s a great cause,” the director said. “I was happy to come up to New York. I have an apartment here, but I live in Atlanta. We’re going back tonight. Whenever this is over, I fly straight back. Nothing against New York.”

Perry’s brief visit was understandable, considering his schedule: He has two films, “The Marriage Counselor” and “Good Deeds,” in the works, as well as a new television series, ‘For Better or Worse.” Prolific seemed an understatement.

“Thank you, I try; water helps,” Perry said, “It helps everybody.”

Sure enough, when charity: water founder Scott Harrison took the microphone later in the evening with Biel by his side, clapping enthusiastically throughout, three words appeared emblazoned over their heads: “Water Changes Everything.”