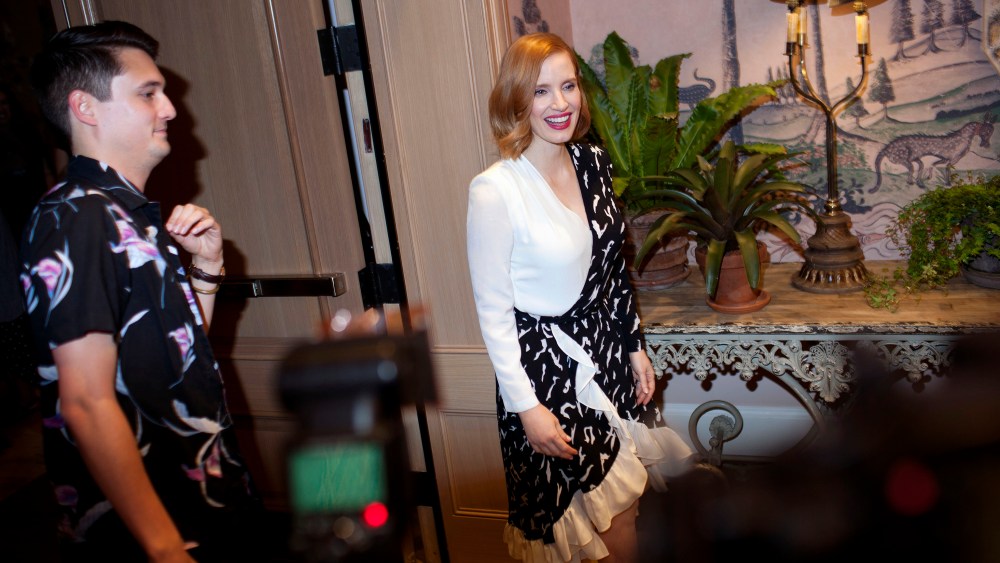 President Trump’s border politics have become all the more necessary to talk about for Jessica Chastain, who, while on the promotional tour for her new film “Woman Walks Ahead,” has drawn parallels between the debate over immigration and her film’s depiction of the injustices experienced by the Lakota people.

On Tuesday night, Chastain and costar Michael Greyeyes gathered at the Whitby Hotel to screen the film for a New York audience, and speak to the cultural and political significance of the movie. The actors were shooting as protests took place against the Dakota Access Pipeline at Standing Rock. The film’s release parallels with the Trump administration’s family separation policy.

“Every day I’m reading about children getting separated from their families and getting adopted into American culture and it breaks my heart because that’s exactly what happened to indigenous people,” Chastain said during the press line ahead of the screening. “Children were taken away from their families, forced to only speak English and had to wear Western clothing. The Lakota language is basically a dead language now because of it. The country worked really hard to eliminate all indigenous culture, I think that’s something that is woven into the fabric of our nation. I don’t think this is a new thing that’s happening and I think we really need to examine who we are as a people and confront it to move forward.”

Based on the true story of Catherine Weldon, a Brooklyn-based painter who travels to North Dakota to paint a portrait of Chief Sitting Bull in the 1880s, “Woman Walks Ahead” is a unique take on the Western genre told through the female gaze.

“The thing about traditional Western [film] is it’s normally a man’s world where the men are very violent,” said director Susanna White. “I think people will find it gentle for a Western because it’s not a Western that glamorizes violence. When there are moments of violence you really feel them and you feel the consequences. I think the film has very layered characters and it’s about human connection.”

The movie, which made its debut at the Toronto Film Festival, centers on the relationship between Sitting Bull (Greyeyes) and Weldon (Chastain) as the two get closer. As Weldon sees the injustice the Lakota people face, she joins Sitting Bull in the fight to keep indigenous lands from being taken away by the U.S. government.