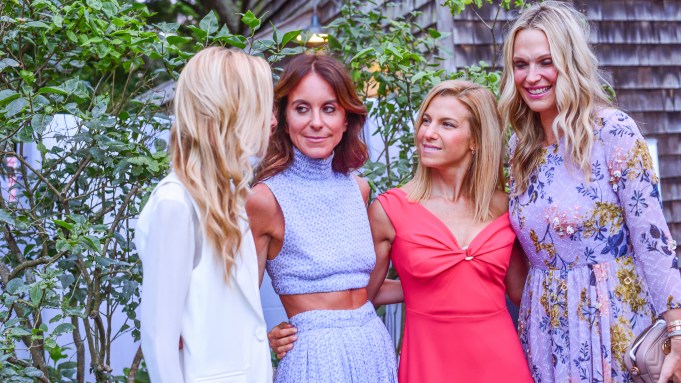 “Are there any women here who have heard of Net-a-port-er?”

A round of laughter broke out underneath the light-strung tent in the backyard of the Seinfeld Estate. Good joke, Jerry.

An intimate and well-heeled crowd —Brooke Shields, Molly Sims, Melissa Joan Hart — had successfully gotten past the  security checkpoint at the gates of Jessica and Jerry Seinfeld’s East Hampton home on Saturday night, where the pair were hosting a dinner to celebrate their latest GOOD+ initiative with the luxury e-tailer.

“We’re so happy to have you at our home — this is where we live, by the way, this tent,” Jerry continued to deadpan before taking his seat next to his 16-year-old daughter and Howard Stern. “The tables are where we sleep and eat, and believe me, it looks so much better now with everybody here than what it does usually, when it’s just the five of us and 600 chairs.”

Now through Aug. 13, the Net-a-porter same-day delivery van will bring customers their new purchases, and cart away any gently used children’s clothing and books for donation to GOOD+. The foundation provides resources for in-need families to help break the cycle of poverty.

“I just cleaned out all of my kids’ libraries of books that they’ve grown out of, and I’m calling my Net-a-porter van to pick them up tomorrow,” said Jessica, who had donned a green Sacai bomber jacket over her hot-pink frock. She’s presumably had extra time while their two younger children have been away at summer camp for seven weeks. “At first off I thought it’d be a really long time, but they have built-in sports teams all day long. I don’t have to worry about them trying to find a kid to play baseball with, or tennis with, or whatever sport they want to do. They have a built-in team in their bunk.”

During dinner, one customer (“I write the checks,” he clarified) marveled at the retailer’s presence in the Hamptons, both in the air and on the ground. Where the money goes, Net-a-porter follows.

“This charity means a lot to me; I’m a mother,” said Jennifer Fisher, huddled with Jason Wu. She had flown in earlier from Maspeth. “But also anything Net-a-porter, and I’m obviously involved. They’re one of our biggest retailers,” she added, and Wu agreed. “We’re happy to be here and celebrate,” he said.