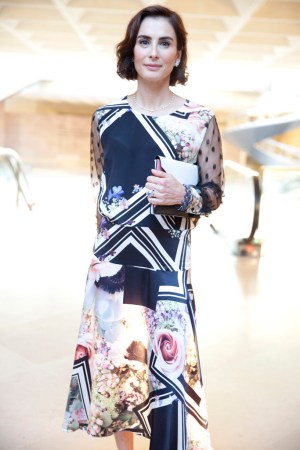 PARIS — It took an outsider to achieve the unthinkable: Gathering major jewelry houses under one roof during Paris Couture Week.

That is what Judith Price, president of the U.S. National Jewelry Institute, did with the gala dinner at the Louvre museum on Monday night for the inaugural edition of an awards ceremony distinguishing the best pieces produced by leading fine jewelry and watch brands.

The evening’s hosts, Princess Tatiana and Prince Nikolaos of Greece and Denmark, were last-minute no-shows due to the crisis in Greece.

“I kind of think it’s amazing. It never happens,” Amfitheatrof said as guests mingled above the central atrium of the museum’s modernist pyramid. She noted her longstanding friendships with Azagury-Partridge and the Bulgari family.

Despite this, the designer professed not to pay attention to the competition. “I always want to look forward, so I never look at what other people are doing, because I think it’s in the past,” Amfitheatrof said.

Bäumer said he was focusing on his own business after spending more than two decades designing for the likes of Chanel and Louis Vuitton. “I want to do more of what I like and what I want to do for myself. I don’t wanted to be bothered by marketing, and I think even customers feel that way today,” he said.

Nonetheless, he echoed Amfitheatrof’s sentiment. “I think it’s great that everyone is talking to each other,” said Bäumer. “Economically, France is not a country where people wear a lot of jewelry, where there are a lot of buyers, but it remains the center of jewelry and it’s thanks to initiatives like this.”

Guests enjoyed a three-course meal prepared by Michelin-starred chef Éric Fréchon, including a chocolate dessert shaped like a cocoa pod.

For Price, it was the culmination of nine months’ work. “A baby’s been born,” she said as she greeted guests. The previous day, certificates were handed to the 39 houses distinguished for their design, creativity and innovation at a cocktail held at the Bristol hotel.

The initiative was born of a partnership between the National Jewelry Institute and the Parsons School of Design that will also include weeklong courses in Paris in September and New York in October called “The Fine Art of High Jewelry and Timepieces.”

Joel Towers, executive dean of Parsons, said the collaboration was a first step toward resuming the school’s jewelry design programs, but with a fresh approach.

“The materials and the craftsmanship are being challenged by all sorts of issues around sustainability and labor, and really interesting value questions that are starting to redefine luxury itself,” he noted.

“Jewelry is a space that we can reenter now with new technologies and new materials and produce really beautiful objects of high value that are also meeting the criteria of the 21st century. So it’s the right time to get back into it,” he added.