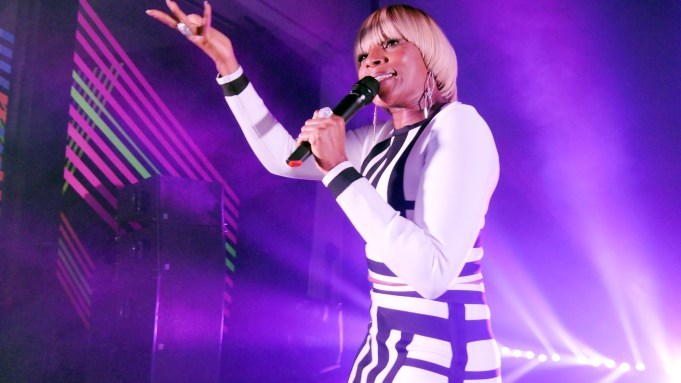 An address in Manhattan’s Meatpacking District, a live musical performance, a rotation of “It” models, a few actresses thrown into the mix — the standard recipe for any party during New York Fashion Week. And on Thursday night, Jimmy Choo delivered on all fronts for its 20th anniversary, with a few extra elements thrown in.

“I always like a surprise. When you’re not expecting something, that’s the best,” said Sandra Choi, Jimmy Choo’s creative director, who is in New York through Sunday for the brand’s birthday celebration. “New York is our second home,” she explained. “For me, it’s important to actually get away from London, and show the world that we’re global.”

The footwear brand had decked the raw Meatpacking space — previously Buddha Bar — in neon lighting, an Instagram-friendly balloon installation and neon tape structures designed by artist Jordan Seiler. Mary J. Blige took the stage for an early performance, later followed by an a cappella group — an unusual choice for the NYFW club scene. Upon arrival, each guest was also provided with their own accessory: a plastic wristband that lit up along with the music. Not as exciting as a pair of shoes.

But sure enough, each VIP soon teetered by in their own pair of Jimmy Choos. The party was cohosted by Amber Valletta, Sasha Pivovarova, Taylor Hill, Lexi Boling, Jasmine Tookes and Xiao Wen Ju, who all appear in the brand’s fall video campaign, which was released later that night. While the shoes were a nice perk, it wasn’t the main draw for every notable. “I’m here for Mary J. Blige,” said Iman, before showing off her nude stiletto sandals. “I just got a pedicure, so you can do a closeup on the toes.”

Diane Kruger made an early appearance (the better for putting in face time and also getting home at a reasonable hour). The actress is keeping her fashion week schedule light. “I’m prepping,” explained Kruger, who will soon begin shooting a film with German director Fatih Akin. “I’m getting nervous.”

With six more nights of partying ahead, how does fashion week’s rotating cast of notables manage to stay fresh-faced up until the last day? “I take it all in stride,” explained Valletta. “I meditate, exercise and try to get sleep.”