The director drew Jennifer Garner, Amy Adams and Scarlett Johansson to a shopping party to benefit the Children's Defense Fund. 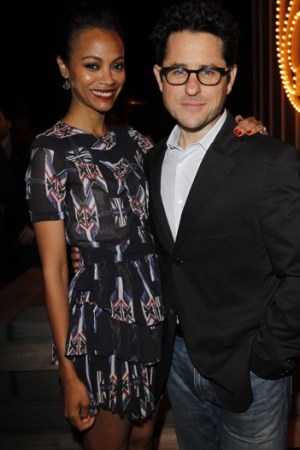 “I’ve never been to one of these before,” said J.J. Abrams of the Coach shopping party he hosted with wife Katie McGrath on Wednesday night. Held on the rooftop of his Santa Monica-based production company Bad Robot, the event, benefitting the Children’s Defense Fund, was “the first of hundreds of shopping parties to be held here,” Abrams joked. “Although this place doesn’t quite have the history of the Chateau Marmont.”

The event drew the biggest slew of actresses to one place since Oscar week, including Abrams’ onetime “Alias” star Jennifer Garner, who just wrapped promotional duties for her film “Arthur” and is now, she said, “Glad to be home and taking care of my actual life.”

Some also took the opportunity to network.

“I just saw ‘The Fighter,’” Abigail Spencer told Adams. “You were amazing in it.”

Most guests came away from the event toting shopping bags full of purses they had actually purchased.

“I’m a girly girl,” said Henson. “I just love to shop, and this was for a good cause. I don’t have to explain that one to my business manager.”