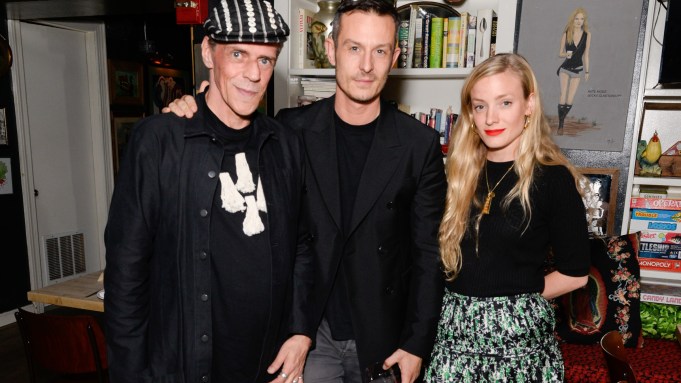 Jo Malone London’s dinner at Spotted Pig on Thursday night was all about the packaging — Judy Blame’s packaging, that is. The British creative recently rendered the brand’s iconic boxes with his own design, and was in town to celebrate alongside several of his friends and past collaborators: Peter Copping, Rambert Rigaud, Narciso Rodriguez, Sophie Theallet, Jonathan Saunders, Paul Andrew, Jessica Joffe and Chelsea Leyland.

“We met years ago in Paris,” Rodriguez remarked. “And like everyone, I am a very big fan.”

One of Blame’s biggest fans was gushing over the button-heavy box designs before dinner. “I think it’s fantastic, it’s very Judy,” exclaimed Theallet. “He’s an inspiration to me; I have so much respect for him,” she continued. “I think for me, Judy is what you call — it’s like he’s a genius, he’s the one who makes everything in fashion before everybody else. I have so much admiration for him.”

“Easy, Sophie,” Blame said, beginning to blush as he embraced the designer.

He created several designs in the style of London’s Pearly Kings and Queens. “It just fits something like Jo Malone,” he explained. “In Pearly culture, all the symbols mean something—so a heart means love, anchor means hope, the crown means royalty.”

Blame is heading back to London on Sunday to continue preparing for his first retrospective. “It’s a little bit daunting,” he said of the exhibit, which opens later this month at Institute Of Contemporary Arts in London. “The thing about my career is I’ve jumped around from music, fashion — I’ve always kept it open. So when they asked me they were like look, we’ve never done anyone like you before — what do they call it? — polymath, they keep on calling me. I didn’t even know what polymath was.”