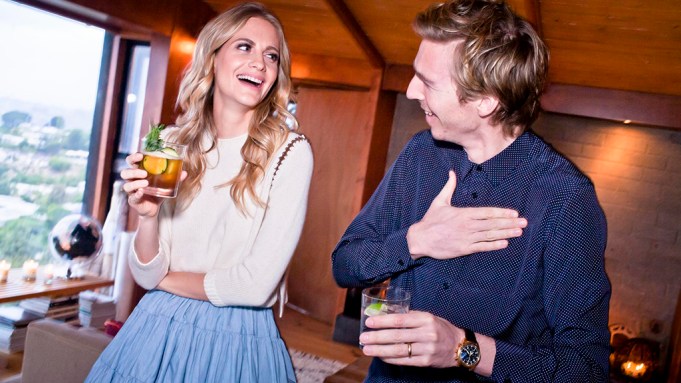 She was at a dinner being thrown in her honor — Jo Malone toasting Delevingne, their new brand ambassador. Looking out the floor-to-ceiling windows offering sweeping view of the city, it was clear the sky would open up at any minute. “I remember when we started planning this months ago, I’d said, ‘There’s this amazing place. It’s incredible. It’s outside.’ Everyone was like, ‘What if it rains?’ I said, ‘Guys! It’s LA. It doesn’t rain in LA.’ And of course, here we are. Cut to: the night of and we’re expecting rain.”

With a hint of irony, she insisted, “This is a proper English country garden party. This is what we do in London. It’s what we’re used to. It doesn’t bother us that much.”

The unseasonable weather didn’t dampen the crowds’ spirits. It merely required a wardrobe change — even for the guest of honor. “The wonderful Alice Temperley, who is a good friend of mine, made me something really beautiful, but it was not conducive to this, so I pulled out this Miu Miu number instead,” she said, while also sporting Converse in lieu of high heels.

Fellow Brit Cat Deeley read her friend’s mind. “I had a dress ready to go and I couldn’t face it,” she sighed. “I figured, ‘I don’t want to have to go home early because I feel cold and miserable.’ If I’m cold, I’m like the Grinch, so I thought, ‘I’ll put a jumpsuit on, so I can hang out with Pop-Dog for as long as I want.’ Now I won’t be Grinchy or grouchy.”

The weather lent itself to the space, beginning to feel all the more cozy lodge.  A giant moose head was strung with fresh flowers while the scent of roses filled the air. Meanwhile, singer/songwriter Lael Neale performed folk songs as guests gave into the laid-back, cozy cabin vibe complete with a running fireplace and flickering candles.

“Gone Girl” starlet Emily Ratajkowski stopped by before heading to a friend’s birthday. “I saw Poppy at the Met and she invited me, but she didn’t tell me quite how beautiful it would be up here. It’s so lovely. And it smells great,” said the model-actress, who has a busy summer ahead with three projects —including the IFC mini-series “The Spoils Before Dying” with Kristen Wiig and Will Ferrell, the “Entourage” movie, and “We Are Your Friends” opposite Zac Efron. “I’m working as a model still too, so balancing that schedule has proven to be slightly difficult, but it’s all good. I’ll take it any day over having nothing to do.”

After cocktail hour, the group — including Delevingne’s husband James Cook, Jennifer Meyer Maguire, Kate Sumner, and Louise Roe — made their way downstairs for a dinner of shaved spring lamb and fresh fish with rosé. Surrounded by close friends, Delevingne reflected, “I feel like L.A. is my second home now. I’ve really fallen in love with it. I like to work on my freckles or go running up Runyon Canyon. I think I’m a true sunshine girl somewhere deep inside.”