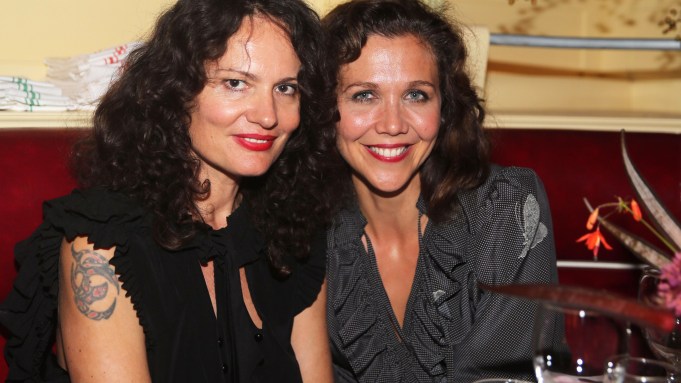 Jane Mayle made a return to NoLIta Tuesday for a dinner party at Cherche Midi, an occasion that sparked nostalgic conversation about the neighborhood that once felt cool and undiscovered — and if such a place like it exists in the New York City of today.

The late-evening affair drew a mix of guests from the fashion, publishing, arts, beauty and entertainment industries all with close ties to Mayle, Jo Malone, or their shared provenance — London — to celebrate the designer’s reentry into the fashion world with her new line, Maison Mayle. Actor Maggie Gyllenhaal was in attendance, along with New York City Ballet principals Tiler Peck and Robbie Fairchild, actor Sophie Sarah Flicker, Bon Appétit editor in chief Adam Rapoport and a crew of ex-pats, including Kate Foley, Karen Elson and gallerist Lucy Chadwick.

“Jo Malone has always loved groovy London girls, and Jane Mayle was the original groovy London girl in New York City,” said John Demsey, executive group president of the Estée Lauder Cos. Inc., Jo Malone London’s parent company. “There’s no shill here tonight, one of the rare occasions in New York City during fashion week. It’s a nice chance to [get together] with family and friends.”

Mayle shuttered her namesake label and store, located on Elizabeth Street just around the corner from Keith McNally’s French bistro where the dinner was being held, in 2009 after the recession hit. By then, the once uncharted neighborhood where she’d opened shop in 1998 had already begun to turn into the bastion of commercialization it is today. “It was such a special, distinctive flavor…it was a place where New York had this certain spirit, it matched that European vibe. I felt partly responsible for bringing about the very thing that made me want to move out of the neighborhood,” said Mayle. “It’s hard for me sometimes to remember it because as attached as I was to that one block, I don’t feel like I have ownership over the area. It’s been nice to come back down here, though.” Aside from the evening’s dinner, Mayle noted she has also been busy with another neighborhood project, albeit not her own — designing the uniforms for Augustine, McNally’s yet-to-be-opened restaurant at the Beekman hotel.

Mayle was uncertain that when the time comes to find a similarly charmed retail location for Maison Mayle that she will discover a neighborhood with the same vibe has her Nineties NoLIta. “Every place has been discovered and milked for all its worth,” she said.

Mayle was in agreement. “I stumble upon places all the time that I think, ‘I could have a shop there,'” she told WWD, noting she’d had her eye on 30 West 12th Street before it went to Suzanne Demisch’s gallery. “There’s still magical spaces.”