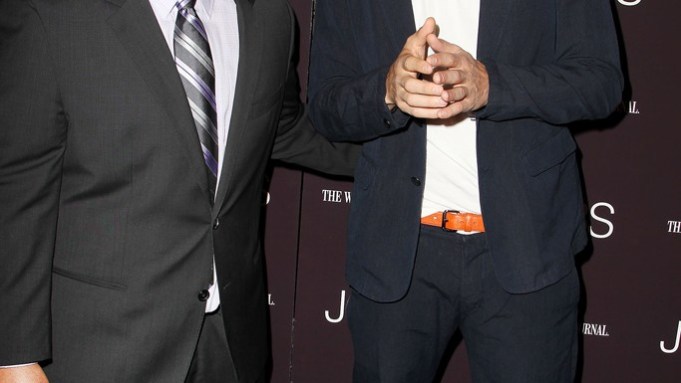 Ashton Kutcher neared the end of a raucous press line in the lobby of MoMA in Manhattan before he calmly explained what it was like to fill the shoes of an icon. “I finally got to play the guy that everybody ‘kind of’ knows,” Kutcher said. “But Steve Jobs wasn’t always Steve Jobs, the guy in the turtleneck with the jeans and the New Balance sneakers and the glasses presenting another brilliant product to the world. He wasn’t always that guy.”

The actor, who assumes the role of the late tech icon and Apple cofounder in the biopic “Jobs,” was flanked by costar Josh Gad and a slew of guests including Waris Ahluwalia and Rachel Roy on the red carpet Wednesday night at the Wall Street Journal-hosted screening. The film chronicles Job’s life and ascendance in the tech world across three decades. Though the Apple kingpin was a fairly private figure in the public eye, many of his personal attributes are divulged on the big screen, as director Joshua Michael Stern pointed out.

“The man who we knew to give these incredible keynote speeches and be so eloquent was actually a very reserved and frustrated guy when he was younger because he was trying to discuss technology that didn’t exist yet,” Stern said as moviegoers filed into the theater. “It was like he had the cure for cancer in his head but there was no way to communicate it to people.”

It wasn’t all grave talk as certain guests took the opportunity to dish on their own memorable Apple moments. “I remember seeing the iPhone for the first time in the store when it came out. I just thought, ‘Wow, all you have to do is touch the screen?’ I was pretty dumbstruck,” Matt McGorry, from “Orange is the New Black,” said.

When asked which Apple device she could not live without, Arianna Huffington had no reservations with her answer. “The iPod,” she said. “It’s amazing and perfect for people like me who want to hear a song on repeat over and over.” Post screening, corks were popped and Champagne flutes drawn at the Royalton Hotel’s Forty Four bar for the after party, where the likes of Jessica Szohr and Nicky Hilton mingled in shadowy corners.