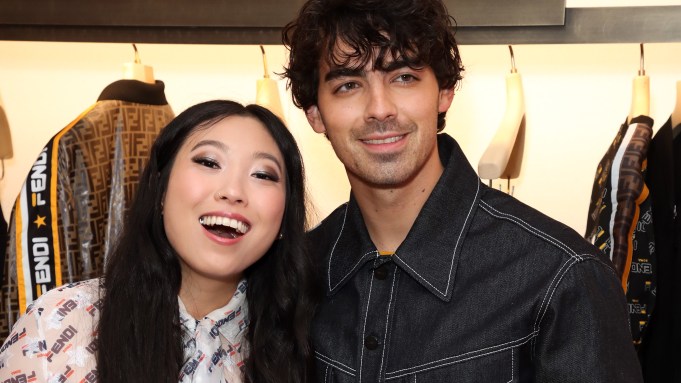 Fendi Mania officially hit both coasts on Tuesday night, with celebrations of the logo-filled collection in the house’s Rodeo Drive and Madison Avenue boutiques in Los Angeles and New York, as well as parties for the buy-now range in Shanghai, Tokyo, Hong Kong, Kuwait, Paris, London and Moscow.

Representing both sides of the U.S. was Awkwafina. “I just moved [to L.A.] two weeks ago. I’ve lived in New York my entire life and it was time to get out. I’m like a townie, you know? So it’s nice to experience living on your own without your dad immediately there,” she said. She called the collection “dope” and said, “I’m excited to just be out. I can’t believe I was invited. I used to live in the greatest city in the world but I never went out, you know?”

The rapper and actress has performed at a couple of L.A. spots, but says she’s “still coming off the high that was ‘Crazy Rich Asians.’ It’s such a gift to be a part of that. I probably will take on some new things in the new year.”

Until then, she’s going to try to enjoy the great outdoors.

Also enjoying the L.A. event was Joe Jonas, a self-described fashion fan. “My favorite thing right now is watching the older brands re-create themselves and how they do it. It’s always impressive, especially Fendi and what they’ve been able to do is really cool,” he said.

He first got wind of the new collection through the artist Reilly. “@hey_reilly is a really cool Instagram I’m always following so when I saw them starting to post what they were working on with Fendi, it made me more excited. Supporting another artist is really cool and important so I’m proud to be here.”

He also was a bit covetous. “This store is sick. I want to lay on everything; it looks really comfortable.”

Model sons-of in attendance included Presley Gerber and Miles Richie, who is the current face of MCM’s logo-filled campaign, though he was enjoying his double-F fur jacket for the night.

“I’m really shy, so modeling has helped me come out of my shell and I’ve met all kinds of new people I wouldn’t otherwise,” saidthe youngest Richie, whose sister Sofia was stopping by later. “We’re a close-knit family and we support each other. My dad is great with the stage fright part of it,” he added.

Other musical artists in the mix were Haim, who just returned from 10 days in Paris.

“We performed at the YouTube party and went to shows. The party was at the American Consulate, which was so cool. There was just a casual Calder hanging there,” said Este Haim.

Now that they’re back home, they’re working on new music. “We’re home for the holidays and our parents are happy about that,” Danielle Haim said.

But they had other plans on Tuesday night. “We’re going to the Drake concert with a bunch of girlfriends. We’re gonna be, like, live tweeting the whole thing.” They also weren’t changing out of their Fendi ensembles, which were all white and long.

“We’ll be angelic, but with cowboy boots,” they said of their matching footwear.