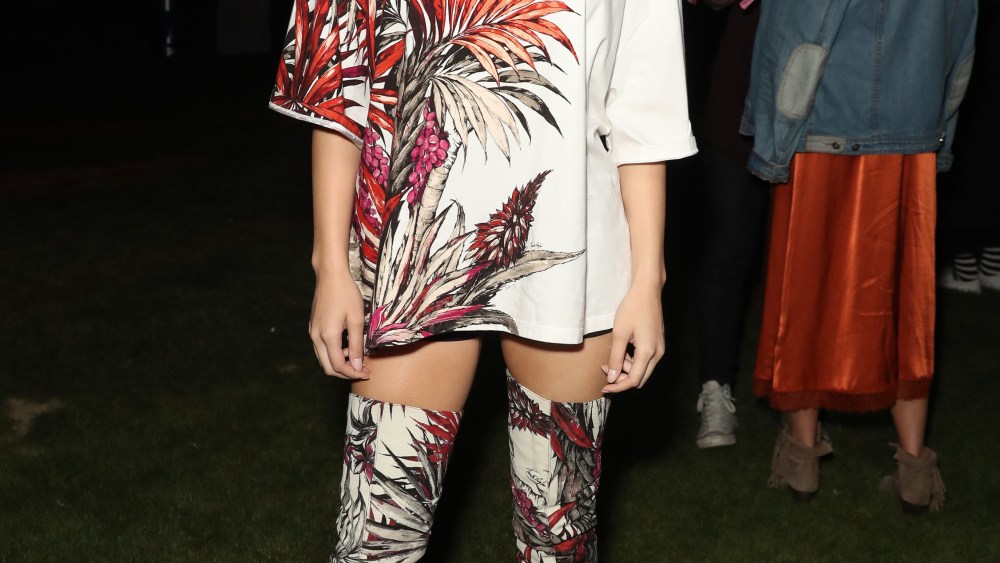 Coachella’s biggest fans came out in full force on Friday night, capping off the first day of the desert music festival at the annual Nylon Midnight Garden Party fete, held outside the festival grounds in Indio, Calif. “I am so embarrassed to admit this, but it’s my eleventh year,” said DJ Hannah Bronfman. “It’s just one of those festivals which, it’s not that hard on you, the lineups are good and the desert gives off this cool vibe.”

Boasting a DJ set lineup featuring Virgil Abloh and Johnny Wujek, the late-night outdoor extravaganza, now in its third year, drew a celebrity-laden guest list of festival veterans including Scott Eastwood, Nicole Richie and Hailee Steinfeld, fresh off her own daytime performance at Republic Records and SBE’s The Hyde Away off-site event.

“Republic is my label, so spending time with them was like being with family,” said the two-time Coachella attendee, sporting a head-to-toe Fausto Puglisi look, as she sequestered herself in a private cabana with friends. Meanwhile, DNCE’s Joe Jonas, clad in Double RL, was spotted getting cozy with girlfriend and “Game of Thrones” star Sophie Turner.

“Last year I was watching everyone on Instagram and I was like, “Oh I want to be there! I was like, next year, I am coming, I don’t care!” admitted model Jourdan Dunn, dressed in House of Harlow 1960, who skipped Coachella last year. She could hardly contain her excitement for Kendrick Lamar and DJ Khaled’s Sunday night performances.

On the list of fans who didn’t make it through the gates of the invite-only affair: Katy Perry, with entourage, whose car was turned away by the police close to 1 a.m., when the party began to wind down. By 2 a.m., Wujek and pals were already headed out the door, knowing they had a full weekend of parties to look forward to.

“It’s a tradition for me,” said Hailey Clauson, of her six-time Coachella streak. “Every year it gets crazier and crazier, but I always come back.”