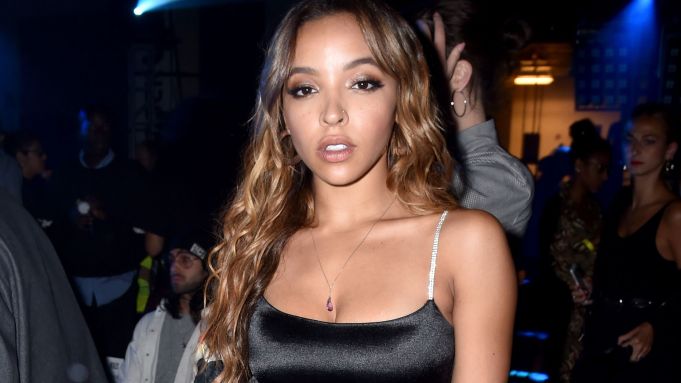 The rule of thumb for first-time VFiles showgoers is to expect the unexpected. One hour past its scheduled time in the basement of the Barclays Center, the runway show/concert hybrid started with rapper Offset driving a yellow Lamborghini straight into the middle of the runway. He sauntered around the car while finishing off a smoke, then promptly took a seat.

“VFiles is spontaneous and unpredictable,” said Young Paris. “It could be unisex, it could be dresses out here, it could be floral.” It can even be a Lamborghini.

“It’s kinda like discovering a new band — you always find a hit and find something that speaks to you,” offered Joel Madden, who flew out from Los Angeles specifically for VFiles. “A few years ago, my brother and I started a music media company called MDDN and we work pretty much full-time on that. We have a bunch of stuff coming out with our company, some really great artists we work with. Jessie J has a new record coming out that she’s wrapping up for this fall, and it’s going to come out probably next year. Good Charlotte will probably come out with a new record at the end of the year.”

Next to Madden sat Anastasia Karanikolaou, aka Stassie Baby, one of the members of Kylie Jenner’s squad. Wearing a “Kill Bill”-inspired yellow and black set, she shared that she was “really excited to see the makeup” coming down the runway.

“I just want to see everyone break the rules and break the mold,” said Tinashe, seated next to Dapper Dan. “I feel like this year, it’s all about defying old stereotypes and coming up with new ways of thinking.” She’s planning on seeing “old friends” like Jeremy Scott and Alexander Wang, but overall, she’s keeping her fashion week schedule fairly light — “hopping around, some parties here and there.”

“I actually have a brand new song coming out that I’m very excited about,” she continued. “That’s probably what’s most immediately in the works. It’s very cool. It’s muted, it’s very sexy.”

Nearby, up-and-coming rapper Lizzo was in a tizzy in tulle. “I’ve literally never been to a fashion show before,” she said. “This is a crazy cherry being popped.”

Her red tulle bomber — “actually, it’s like a trenchcoat” — was by Kaimin, but the rest of her outfit was simply “my sexy body.” She’s gearing up for a few performances throughout the week, including DragCon, Christian Siriano and the unveiling of Refinery 29’s 29 Rooms.