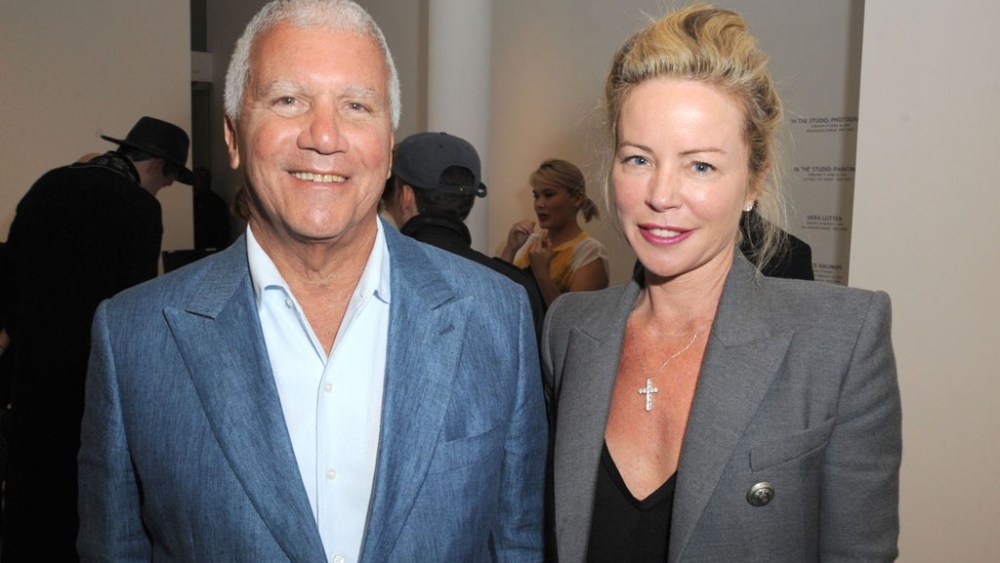 Even as flashbulbs popped around the artist and his wife Rachel Feinstein Thursday night for Currin’s first solo Los Angeles show in more than a decade, he remained self-effacing and soft-spoken. “Really? I’ve never been to one of these Beverly Hills things,” he said when informed that his presence was drawing quite the crowd. “It’s much more fun than New York.” Indeed, Currin and Larry Gagosian managed to pull a geographically mixed crowd of heavy-hitters including Mick Jagger, Steve Martin, Leonardo DiCaprio, Nicolas Berggruen, Jamie Tisch, Harvey Keitel and Dasha Zhukova.

“We’re having a really good time,” said Feinstein, in her signature Marc Jacobs, before her gaggle of children pulled her away. “I’ve got to go find a room for them upstairs,” she said apologetically. Just then, DiCaprio, barely recognizable under a bushy beard and newsboy cap, came up to greet the couple, causing a flurry of cell phones to rise up around them. In the other gallery, Gagosian was busy showing collectors Bill Bell and Maurice Marciano a few key pieces, although the gallery wouldn’t divulge how many of the large-scale paintings had already sold.

The scene was equally hopping outside on Camden Drive, where Wes Anderson was pacing around in the same seersucker suit he had on the night before at Chateau Marmont, presumably waiting for friends. A few minutes later, Sam Taylor-Johnson, the director of “Fifty Shades of Grey,” and husband Aaron walked up hand-in-hand, and stood chatting with Anderson for several minutes before heading inside.

Not far behind them were artists Doug Aitken and Richard Phillips, and Museum of Contemporary Art director Philippe Vergne. More than a few guests were doing double duty that night, as the Hammer Museum was opening a Thomas Heatherwick exhibition across town. “I haven’t even seen the paintings, and it’s already time to go to the next party,” lamented one guest as his friend ushered him toward the door.​