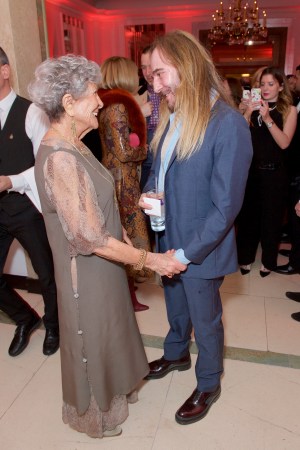 B IS FOR BIRTHDAY: “A 90th birthday party — this is so rock ‘n’ roll,” said Simone Rocha as she stepped into Claridge’s ballroom Sunday night to celebrate London’s best-known luxury shopkeeper, Joan Burstein, known in the industry as Mrs. B.

A jazz and swing band played Frank Sinatra and Nina Simone tunes as guests, Champagne glasses in hand, filed through the doors into what felt like one big family fiesta, with Burstein’s chic grandchildren — and great-grandchildren — dancing and weaving around the room that was thick with nearly 200 guests.

They included some of her oldest friends and protégés — John Galliano, Alber Elbaz, Manolo Blahnik, Stephen Jones, Rita and Angela Missoni and Sir Philip Green. Nicole Farhi, David Hare, and Paul Smith — who used to work for Burstein on the shop floor — were also there.

José Neves, the owner of Farfetch.com who last year purchased Browns, was among the guests along with Holli Rogers, Browns’ new chief executive officer. The store, which Burstein’s family built into one of Europe’s best-known independent retailers, will in future become a laboratory that aims to marry online and offline retail experiences.

“I owe my career to Mrs. B.,” said an ebullient Galliano before dinner. “She came to see my graduate collection in 1984, and before I knew it, I was in the window at Browns — and my first customer was Diana Ross.”

Elbaz said every time he adds a sleeve to a dress, he thinks of Burstein. “She would come into the showroom, tell me how much she liked the collection, and then ask ‘Where are the sleeves?'” Elbaz said. “She supported all of us designers, but it was never done in a heavy way. It was never ‘Oh, here comes the queen! It’s more like here comes my aunt.'”

Burstein, dressed in a long vintage Céline dress with lace sleeves, worked the room, greeting her guests with hugs. “She looks like she’s about 60 — it’s incredible,” said Green, a longtime friend of Burstein and her late husband Sidney.

“She’s good with people, she connects with them, and throughout her life she’s also been a great finder of talent. She had everything before everyone else did, and was the first to bring Ralph Lauren and Calvin Klein to the U.K.,” he added.

Burstein opened shops for those American designers, and was also the first to bring the edgiest French and Italian brands to the U.K. in the Seventies, when many well-heeled British women were still having their clothes made by dressmakers. In the Eighties, she regularly took risks on very young designers — like Galliano, Alexander McQueen, and Hussein Chalayan.

Both Lauren and Calvin — as well as Paul Smith Erdem Moralioglu and Mary Katrantzou — paid tribute to Mrs. B in videos that were broadcast during the dinner, where guests dined on lobster risotto, rack of lamb — and lots of Champagne and birthday cake.

“She loved nothing more than engaging with customers on the shop floor — and then checking the tickets at the end of each day to see what sold,” said Simon Burstein, her son who’s recently opened his own luxury shop near Marble Arch.

He said his proudest moment was seeing his mother chatting endlessly with Queen Elizabeth at Buckingham Palace, when she received her CBE, Commander of the Most Excellent Order of the British Empire honor, in 2006.

“It was my proudest moment watching them together. After all, they have so much in common. They are the same age, with birthdays that are close together. They both love the same colors and carry Launer handbags, which, by the way, you can find at my new store,” he said.