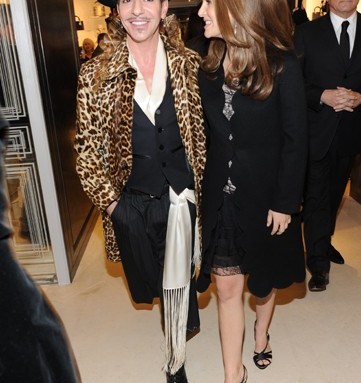 Natalie Portman had never met John Galliano before her appearance Wednesday night at the reopening of the Dior flagship on 57th Street, where the designer conjured up an apt introduction. Galliano, in leopard print and an enormous black hat, appeared from behind a hidden mirrored door to receive the actress, who had that day been introduced as the new face of Miss Dior Cherie. Portman looked the part in Dior and a bouffant. Dior chief executive officer Sidney Toledano promptly joined the pair, and reminded a demure Portman of their first meeting, when her dog mistook his leg for a potential mate. The three moved further into the salon where yet another mirrored door rolled shut behind them. When it reopened moments later, Portman and Galliano made their way to Madison Avenue to throw the switch on a special display on the facade of the building — a neon outline of a woman in a hat.

The store’s refreshed layout is well suited for shopping, but presented a few challenges to curious partygoers. Hidden exits abound, and the party’s most recognizable guests, including Leighton Meester, Stavros Niarchos and Karolina Kurkova, seemed to always be disappearing through one or another, only occasionally reappearing in a different part of the boutique. At one point, the gyrations of an overzealous guest, who was attempting to bum rush Liv Tyler, tipped over a mannequin, which in turn shattered a full tray of Champagne flutes and drenched a pile of prêt-à-porter. Tyler gingerly stepped over the mannequin’s fallen wig, which lay in a puddle on the marble floor, and was led to a corner by a grinning Galliano.

Amy Adams was the last to arrive but still posed for photographers near the entrance.

“This is my first time here, in the New York store,” the actress exclaimed. “They’ve always been great to me.”

With that, she made her way for the door to a private dinner party.