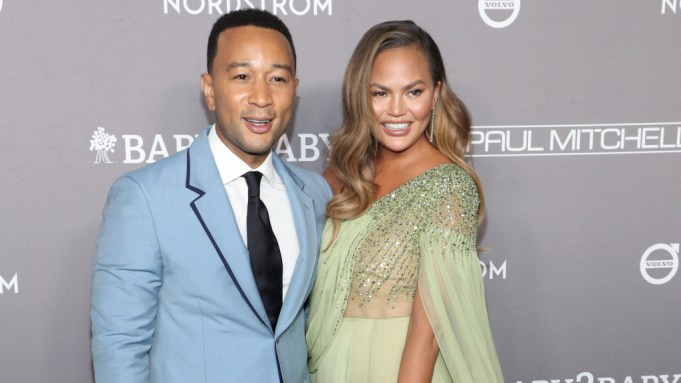 When Chrissy Teigen took the stage to accept Baby2Baby’s Giving Tree Award at the nonprofit’s annual gala on Saturday night, she was true to form. “I’m honestly much more used to winning best titties at the Spike TV awards,” she said to a combination of gasps and laughter from the audience. “Rest in peace Spike TV. So, this is a little different for me. Are there children here? I’m so sorry.”

Husband and musician John Legend presented her with the recognition. “I’m not interviewing,” he had said to reporters. “It’s Chrissy’s night.”

“You look so f–king good,” he told her as she made her entrance in a Georges Hobeika gown inside event space 3Labs in Culver City, Calif.

The occasion, courtesy of lead sponsor Paul Mitchell, brought out Katy Perry, Kelly Rowland, Kobe Bryant with wife Vanessa, Jennifer Garner, Kate Hudson, Jessica Alba, Gwyneth Paltrow, Joel Madden, Olivia Munn, Molly Sims, Monique Lhuillier, Rachel Zoe and newer faces like Mindy Kaling and Kirsten Dunst with Rodarte’s Laura Mulleavy in support of the organization, which works to provide basic necessities like diapers and clothing to children living in poverty. Over the last eight years, Baby2Baby has distributed more than 70 million items to children, from those living in homeless shelters to victims of disasters. By the end of the night, a total of $4.7 million was raised.

“It’s time to make it rain,” yelled MCs Nicole Richie and Ali Wong in unison, announcing the donations as they were rolling in. “Get out your phones motherf–kers,” added Wong. “Let’s do this.”

It’s been important for Teigen to get involved with the cause, she said, simply “being a parent and knowing that there are people out there that are less fortunate.”

Just days before, the prolific Twitter user, who has 11.9 million followers on the platform, plus another 26.5 million on Instagram, faced backlash for tweeting: “my mom treats her air pods like they’re disposable. buys a few a month. she says they would be easier to not lose if they had…a cord.” Following the reaction, she added, “Oh man I haven’t checked my mentions for a bit and I didn’t realize how many people were super pissed off about this. It was meant as a joke (and exaggeration) about how my mom doesn’t realize AirPods are with a cord are headphones but it came across as super tone deaf and icky.”

She’s always aiming to do better, shared Teigen — a model, TV personality and cookbook author — and she and Legend hope to instill the importance of philanthropy in their young children.

“Chrissy is such an incredible mom, and she really gives back to Baby2Baby in every conceivable way, whether it’s financial contribution, her own children’s basic essentials — she gets all of her kids’ items that they don’t need anymore, they’ve outgrown, and she donates them to Baby2Baby and has been for years,” said copresident Kelly Sawyer Patricof, who founded the charity alongside Norah Weinstein. “She comes and spends time with the kids in our program and really gets on the floor, crawls around, Hula-Hoops with them, decorates a cake. She’s really involved, not just on paper.”

The dinner showcased popular Los Angeles eateries such as Felix, Animal and Petit Trois and ended with a performance by Paula Abdul. But first, a video message played featuring Andy Cohen, Kenan Thompson and Ellen DeGeneres, all praising Teigen.

“She’s helped Baby2Baby in every possible way,” shared DeGeneres. “I even heard she helps set up Twitter accounts for every baby that she meets.”

Hours later, Teigen posted a video on the social media platform of herself arriving home from the gala.

“Wow, Jesus,” Legend can be heard saying, as the singer-songwriter films Teigen removing two of his Grammy awards from a bookshelf and replacing them with her Baby2Baby trophy. “Oh my god.”