Travis Mills and Dale Moss came out for a performance by Tyler Bryant & The Shakedown. 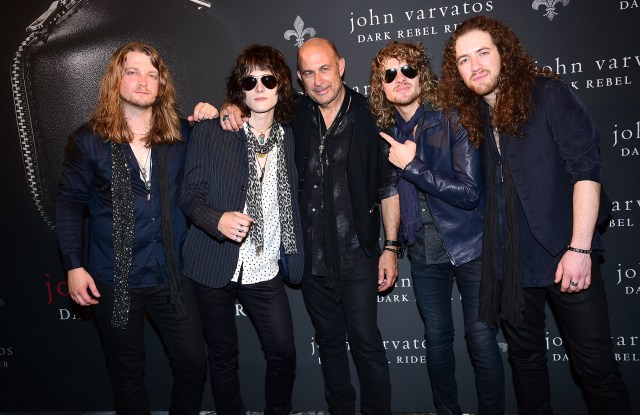 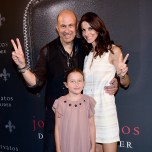 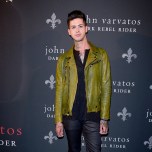 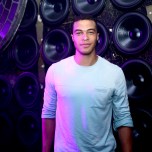 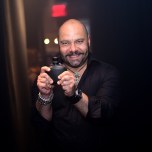 New York Fashion Week: Men’s wrapped up with a bang, or at least one relative to the rest of the week. A young crowd gathered inside of John Varvatos‘ Bowery store — once the venue of famed concert hall CBGB — to toast the brand’s newest fragrance launch, Dark Rebel Rider, and rock out to a very high-voltage performance by the band Tyler Bryant & The Shakedown. A few of the season’s roving notables made their way over to sip drinks from plastic cups and mingle for the last time of the week. A rapper by the name of Machine Gun Kelly had even come wearing the Varvatos look: pinstriped pants and suit jacket, breezy scarf around his neck, and no shirt (better to show off the tats.)

“I don’t want to leave. I had so much fun,” said Travis Mills, a CFDA ambassador for the week. “It’s like, this can’t be the end of it, you know? I can’t get away from it.” Fortunately enough, he won’t be away for very long: he has another fashion week to look forward to in September. But before then: vacation and work. “I’m going to Cabo for, like, three days — take a little mini-vacation. Then I’m back to working on my album and shooting a show,” he said.

Dale Moss, a pro footballer who’s ventured into modeling and is currently represented by Wilhelmina Models, is eyeing the coveted ambassador gig for next year — and has a strong campaign for it given the rounds he’s been making this week. “I love fashion — just how it brings different things together,” he remarked.

Strolling into his store straight from the Roxy Hotel where he held his men’s runway show, the very last of the week, Varvatos seemed calm, cool and collected. “I felt good going in, I feel great going out. It’s always good to get it over with, too,” said the designer. “It’s an honor in a way to kind of wrap it up for the week.”

He’d tapped Tyler Bryant & The Shakedown, one of the bands signed to his record label, to perform.

“They just opened for Guns N’ Roses the other night, they just came here to play, and in the fall they go back out with ACDC,” Varvatos explained. “They’re these…kids who are playing these huge places, and they’re unbelievable. These guys are young, and they’re just cool.”