The fashion designer not only made the rocker’s modeling dreams come true, but he also presented a peace-themed gift that struck close to the Beatle’s heart. 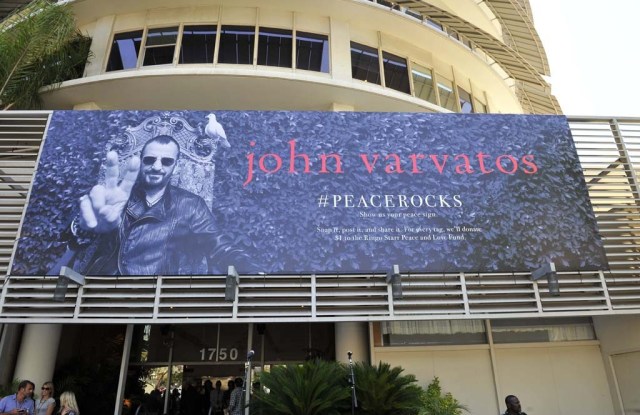 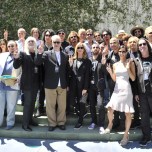 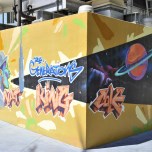 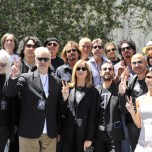 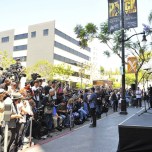 A STARR IS BORN: John Varvatos certainly knows how to throw a birthday party. For Ringo Starr’s 74th on Monday, the fashion designer not only made the rocker’s modeling dreams come true, but he also presented a peace-themed gift that struck close to the Beatle’s heart. With a social media-friendly #peacerocks tagline, Starr and his signature peace sign hand gesture will be the highlight of Varvatos’ forthcoming fall ad campaign. In turn, Varvatos is donating money to Starr’s Peace & Love Fund through a special T-shirt and social media campaign.

It is understandable why Varvatos picked Starr, what with his accolades, touting that the musician is a “pretty sexy guy,” not to mention “the coolest guy on the planet,” at a public celebration on Monday in Hollywood. Despite the mid-morning temperature approaching 90, fans pressed their bodies clad in Beatles T-shirts, clutching cameras and record albums to be signed, against the metal barricades set under Capitol Records’ iconic circular tower. One fan even belted a Union Jack around a tree trunk across the street, in honor of Starr’s Liverpool roots, while a young girl in a blue sundress plopped herself on the sidewalk between the Hollywood Walk of Fame stars for Garth Brooks and Starr’s former bandmate John Lennon.

“John Varvatos made me a male model finally. At home, I’ve always been a male model. And now I’m out on the streets with it,” Starr told the crowd, who made it hard for him to talk with their hoots, whistles and random proclamations of affection. “I’ve got cards full of stuff I should be telling you. But I just want to tell you peace and love.”

Starr had plenty of opportunities to spread peace and love that day. Earlier, he mugged with Varvatos and filmmaker David Lynch, who is partnering with Starr’s charity to promote transcendental meditation in inner city schools and to trauma survivors. Then at the stroke of noon, after a rowdy rendition of “Happy Birthday,” he inspired his fans and famous friends, including Gene Simmons from Kiss, to shout “peace and love” in unison while flashing the peace sign.

And what’s a party without cupcakes and favors? Starr even jumped off the stage to toss black and white bracelets stamped with his peace and love logo to his fans, whom he endearingly dubbed “regular people.” After he left the stage to continue mingling with Foo Fighters frontman Dave Grohl and other well-wishers inside, the groupies traded stories of their encounters with him. Exclaimed one middle-aged fellow to another, “He pointed at me!” No doubt with his peace sign.