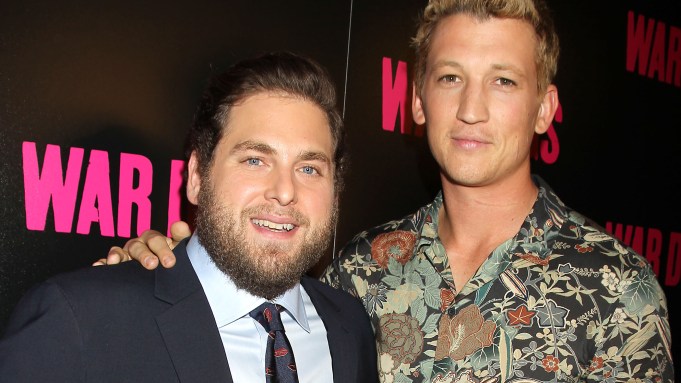 “The story was so insane that I couldn’t believe it actually happened,” began Jonah Hill, speaking from the emptying lobby of Metrograph on Wednesday night. The actor had suited up in a navy suit and a Dries Van Noten (“He’s cool,” Hill said) lip-print tie for the premiere of his latest movie “War Dogs,” a comedy-action film based on real events from the 2000s. A crowd was filing into the downtown theater for a screening of the film, which stars Hill and Miles Teller as two young men from Miami who enter the weapons trade, bidding on contracts to supply U.S. allies with guns and ammunition in Afghanistan.

“The character of Efraim is so explosive, manipulative and kind of ugly that I found a real challenge in like, the idea of, how am I going to make this person enjoyable to watch?” Hill reflected on the allure of his arms-dealing character. “And exploring people that go outside conventional moral boundaries to get what they want, to find their version of success. He’s definitely someone who embodies that.”

To prepare for the role, Hill dove into researching Miami culture. “I found that Miami culture kind of breeds wheeling and dealing, and people that are always kind of on their hustle,” he said. “There’s a real sort of American Dream culture in Miami for sure.”

“I think people a lot of times are defined by where they grew up,” said a platinum-tressed Teller, providing an analysis for their characters’ motivation. “And for these guys growing up in Miami — their favorite movie is ‘Scarface’ — there’s a certain kind of hunger that comes from just wanting to get to the top. For them it wasn’t going to be promoting, it wasn’t going to be with music or sports, but it was going to be with guns. And they just sort of bullshit their way to the top.”

The actor has his dad partially to thank for his role in the movie. “My dad actually came to me about the story. My dad saw that Todd’s company had bought the rights to it, and he said, ‘Dude, you should tell Todd [Phillips, the movie’s producer and director] that you need to be in this.’ And I saw Todd at a restaurant, maybe like two-and-a-half years ago and about a year before making this, I said, ‘Hey man, my dad just told me you gotta put me in this, it looks great,'” Teller continued. “I gotta tell my dad to talk to P.T. Anderson next.”

In fact, next up for Teller is “Granite Mountain,” another film based on true events  about the Yarnell firefighters tragedy that required the typically brunette actor to go blonde. “I’m having a lot more fun,” Teller deadpanned of his new look. “For me, for my personality, I’d never do anything that was going to require more maintenance, anything. So I’d never do this in my personal life.”

But anything for the hustle, right?