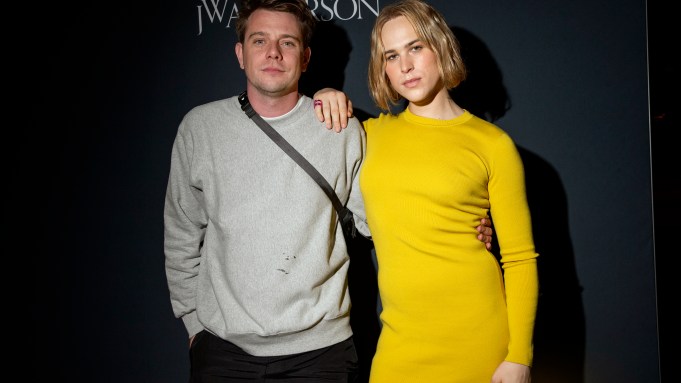 “It has been a long time, my friends, since I’ve seen you.”

Saks fashion director Roopal Patel was addressing the intimate crowd inside the Joe’s Pub library on Wednesday night, where Saks was hosting an event to celebrate JW Anderson’s new Bumper Collection.  Anderson himself was in New York for the first time in — well, a long time — and the retailer had jumped at the opportunity to host the designer downtown at the Public.

The event was cozy and jovial, drawing guests and friends of the brand including Tommy Dorfman, Ella Emhoff, Meadow Walker, Richie Shazam, Hailey Benton-Gates, Chloe Wise, and Kimberly Drew. The dinner was part love-letter to Anderson’s Bumper Bag, which could be seen slung on arms around the room in various colors. Anderson notes that the bag, primed for “It” status this season, was a sleeper hit.

“It was a bag that we had done during the pandemic; we actually randomly have it in collections during the pandemic, and no one noticed. It’s interesting how it just took off,” said the designer. “It was inspired by this idea of bumper cars. I was in Brighton before the pandemic, at a theme park. I like this idea of exploding up the piping on something,” he continued, adding, “It’s nice when things organically happen without forcing it.”

The designer had driven down from Boston just a few hours earlier, where he’s working on costumes for Luca Guadagnino’s film “Challengers.” The film, which stars Zendaya, is set in the present day.

“Luca is a very dear friend of mine. I think he’s one of the most important visionaries; [his work] challenges your perception of the world,” said Anderson, adding that the project marks his first time working in America in many years, and his first time coming Stateside that wasn’t purely “for fashion.” The designer was set to return to Boston early the next morning, where he’ll continue working up until men’s collections for JW Anderson and Loewe in June.

“It’s actually quite nice not to be the boss,” he mused of working on the film. “It’s nice just to be like: whatever will make everyone happy.”

In the spirit of making everyone happy, Anderson had recruited singer Justin Vivian Bond to perform a three-song set at the start of dinner.

“You’re not here often enough, but it is nice that you are here now,” said Bond, addressing Anderson before launching into a lively rendition of the “Bewitched” theme song. “And I’ll see you at London Pride in July.”