The designer scooped the two top prizes at the British Fashion Awards on Monday night. 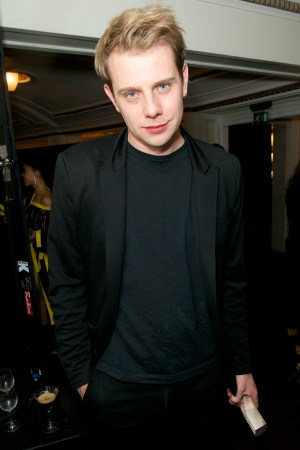 LONDON — Jonathan Anderson scooped the two top prizes at the British Fashion Awards on Monday night, Menswear and Womenswear designer of the year. The first award was presented by Orlando Bloom and the second by Noomi Rapace during the gala dinner and ceremony at the London Coliseum.

After accepting his second award, Anderson paid tribute to fellow winner Karl Lagerfeld, whom he called his biggest hero.

“He makes me believe anything is possible,” said the designer who earlier in the evening also admitted he had a crush on Orlando Bloom, who had presented him with his men’s wear award.

Anderson also paid tribute to “the designers past, present and future who continue to be an inspiration to me.”

More than 800 members of the fashion industry worldwide cast their votes for the annual awards, while more than 2,000 guests attended the red-carpet event in Covent Garden.

The Red Carpet winner was Tom Ford while Jourdan Dunn accepted the model prize from Olivier Rousteing. As reported, Karl Lagerfeld won the Outstanding Achievement Award, which he accepted from Anna Wintour, while Burberry took home the Creative Campaign prize.

Lagerfeld, who was dressed in a shiny Hedi Slimane for Yves Saint Laurent jacket, and his signature tall white collar, said he was quite surprised when he heard he’d won. “I never had the feeling that London paid much attention to what I was doing,” he said, adding that his biggest cross-Channel inspiration has always been English girls.

“When I was an assistant at Balmain there was nothing chicer than English girls. Girls like Stella Tennant – they have always been a great inspiration,” he said.

Asked about his current reading list, he said he’s currently juggling 10 books, including the letters of Katherine Mansfield, a “very depressing book about the family of Thomas Mann” and a new biography of (Baruch) Spinoza. “I don’t read novels.” The secret to his success, however, isn’t in the books or the design studio, but in his bedroom.

“I sleep seven hours a night without waking up – that is the secret of the story. If you don’t sleep well you can’t do anything,” said Lagerfeld.

Midway through the ceremony, a lineup of models stormed the stage, each of whom was handpicked and dressed by a British designer. They walked to a live soundtrack by Alison Moyet. Among the 30 labels that took part were Astrid Andersen, Burberry, Christopher Kane, Erdem, Molly Goddard, Paul Smith, Sibling, Topshop Unique and Victoria Beckham.