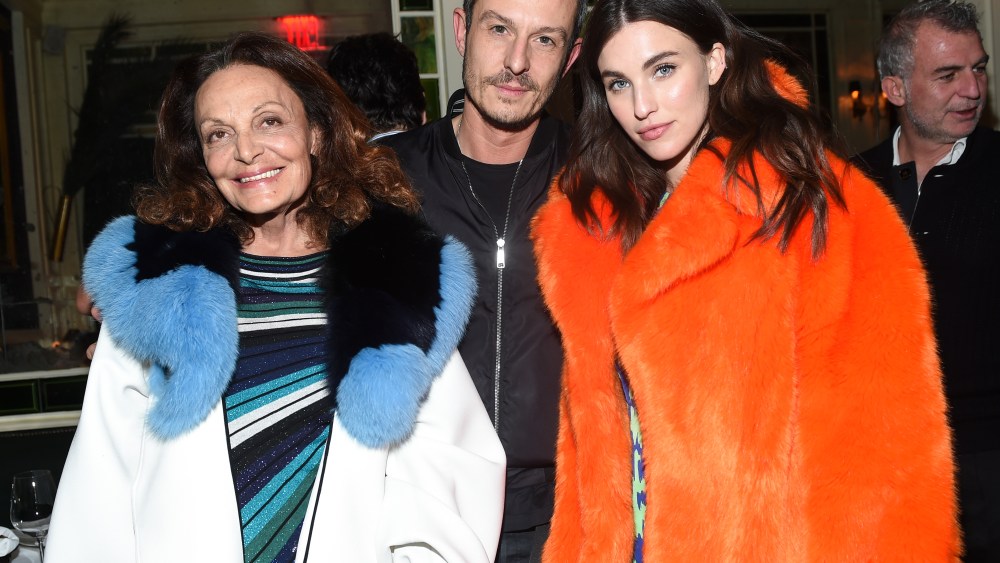 Back in September, after showing his inaugural collection for Diane von Furstenberg, Jonathan Saunders hopped in a cab from his new apartment to head to the Beatrice Inn, where the brand was throwing him a celebratory welcome dinner. The problem? Saunders lived mere blocks from the West Village eatery, and therefore paid for an unnecessary – and very brief – cab ride.

Six months and a second collection later, he’s slowly getting the hang of things. “I live in the West Village, and I didn’t realize that at the time – now I know! [I had] no f–ing idea,” the designer said, seated on a bar stool ahead of dinner. “I’m getting a little more familiar – I have the worst sense of direction of anyone I’ve ever met in my life. But needless to say, I now know my way around the West Village.”

And the New York acclimation, seems to be going swimmingly. “I love New York anyways. I love this city – it’s the best,” he said. Even on a day of freezing rain? “This is my first winter – it’s not that bad, is it?” he protested. “All this drama – I’m from Scotland, though. Gloomy is an understatement. It’s just miserable. It’s not as cold as it gets here but it’s just f–ing miserable.”

As Saunders was settling into New York, Zoe was one of a handful of designers who had flown the coop and shown their collections in L.A. this past week. “You know what, I genuinely had no idea that anyone was going to be showing in L.A.,” she said, in the midst of posting an Instagram. “In October I think it was, I looked at my team and was like, ‘you guys, I feel like doing something here [in L.A.], a very small dinner, with just my friends, and there will be a couple of looks, and it will be, like, 20 people – and then somehow or another it ended up 100 people, 15 models, the whole thing.”

That’s not to say she’s written the Big Apple off entirely – but for the time being, palm trees are calling. “It was the total opposite for me of doing a traditional New York fashion show,” she said. “I love New York, and I love fashion week, but I just needed to do something a little different. And to be honest it just felt right.”

Clemons, herself L.A.-based, is set to spend the next few months promoting projects and filming on the East Coast. “I have a bunch of movies coming out this year, and I’m coming back to New York to film actually, up in the Bronx,” she said. “I think it’s March/April. And then I’m filming in Fiji this summer.” Her advice to a new New Yorker? “Wear cute but comfortable shoes.”
Given his line of work, Saunders is likely good in the footwear department, but he might need some new options for his upcoming travel plans. “I want to go to Niagara Falls, Utah, the Grand Canyon,” he said. “I want to see nature, and, like, America, you know?”