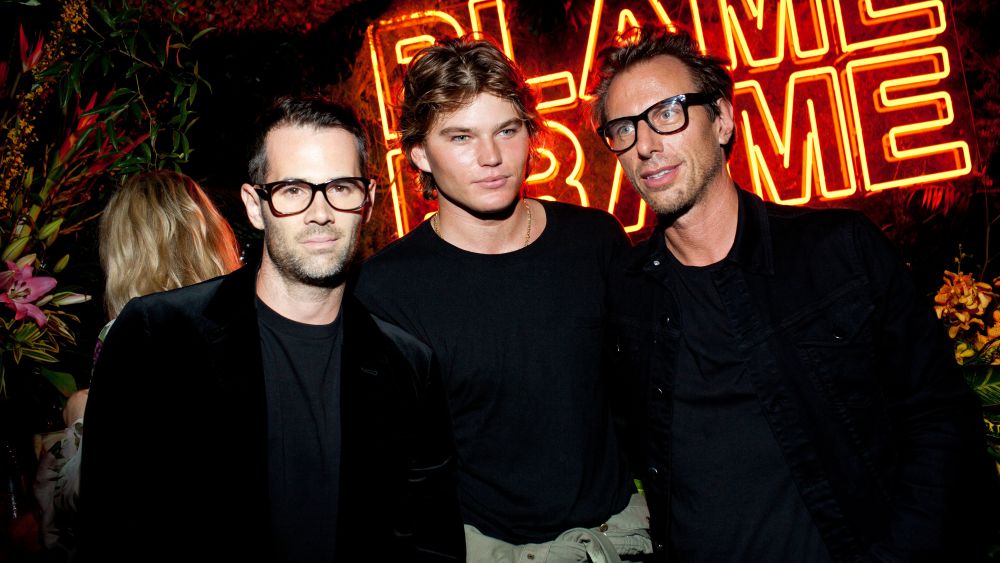 There were many people to blame at Frame Denim’s fashion week dinner.

The model had collaborated with the denim brand on a unisex collection, and to celebrate, every guest was greeted at their dinner spot with a red hat with their name on it underneath the word “blame.”

“Because Jordan’s Instagram handle is @iblamejordan, we started calling [the collaboration] ‘Blame Frame.’ We thought it was funny, and then we were like, we have to do something for everyone who comes, and we’re like, let’s just put to blame each other,” said cofounder Jens Grede. “And we said before the dinner, everyone’s going to be swapping hats and everyone’s going to be blaming one another. It’s just fun.”

“The whole thing came about because we love Jordan’s sense of style. He has like a je ne sais quoi of ‘I don’t give a f–k,'” Grede added. “And I think the point of collaborations is…to do something because someone has something to add to the conversation, or because you want to borrow from someone’s creativity or style, which allows you to do something that you normally wouldn’t do. I normally wouldn’t do a hat that says ‘Blame Saskia.'”

Well, you could certainly blame Frame if Peter Dundas ended up being late to his own party in SoHo. The designer stopped by the dinner during cocktail hour to applaud his friends. “We love Jens and Erik [Torstensson], and we consider ourselves family,” Dundas said. “We’re fellow Scandinavians as well….I always say you should come and support each other in fashion.”

Unfortunately, Dundas had to leave before the hat portion of dinner — he had his first party in New York to tend to. “I figure as long as the music’s good, we’re good,” he said.