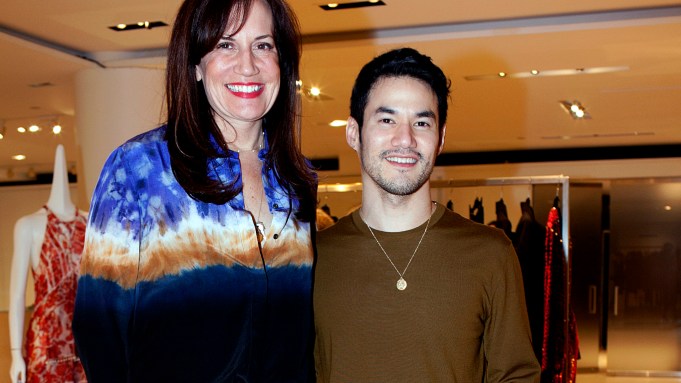 Barneys New York threw a 10th anniversary celebration on the fourth floor of its Madison Avenue flagship in honor of Joseph Altuzarra on Tuesday evening, the first party of the year for much of the fashion set. In honor of the capsule collection he did for the milestone, Altuzarra’s designs were set up in the department store’s windows over the weekend.

“It really was a ‘pinch me’ moment,” Altuzarra said of seeing the windows for the first time. “It does not feel like it was 10 years ago. It feels like two years ago I was in my parents living room, with a rack of 10 pieces, showing Barneys. The buyer from Barneys rushed in from the airport and was sitting on the floor of my parents’ living room and was trying to place the order as quickly as possible because she had to leave for the airport to catch her flight. And it was our first-ever account. And so it’s really amazing.”

He was then interrupted by an admirer, who gushed to the designer that she “loves what you’ve been doing” over the past 10 years. “I always tell everybody that I love your product, but I tell everybody that he is the coolest, the youngest, the nicest, honestly, and that makes a big difference,” she added, stirring some blushes in Altuzarra.

Celebrating his 10th year in business feels “surreal,” he continued. “I think if you had told me 10 years ago that that would happen, I don’t think I would’ve believed it,” he said. “I mean, you’re hoping you’ll have a next show in the beginning. So it’s like no, 10 years later did not feel like something I was even thinking about.”

Over his first decade Altuzarra has become a favorite of many celebrity stylists, and he typically finds himself quite busy during awards season. Recent celebrity fans include Laura Harrier, Claire Foy and Rosamund Pike; Altuzarra Ten face Evan Rachel Wood is a longtime red-carpet collaborator of his.

He remained tight-lipped about any upcoming awards season creations, however.

“I don’t want to jinx it because it’s always so stressful during this period when you’re working on something custom, and essentially they’ve asked seven other people to do it as well,” he said. “So I try not to get excited.”

With that, it was back to the party and the excitement at hand.