The actress talked about her love of Altuzarra accessories, the Emmys red carpet and her latest role on Hulu's "The Path." 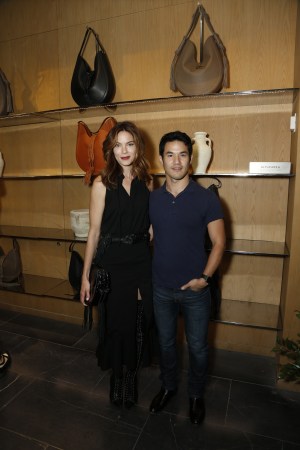 Michelle Monaghan was on the main floor of Barneys New York surrounded by Joseph Altuzarra’s debut bag collection, but she wasn’t talking about the satchels, adorned with bull ropes and gold cigarette lighters. The actress was gushing about the thigh-high, lace-up Altuzarra boots on her feet.

“I just found out they’re called the Dreambox,” she said. “I love that he’s getting into accessories now, by the way, because clearly he knows what he’s doing.” Sadly, the shoes in question won’t be going into production, but Monaghan was happy to keep them on for the evening, especially “if my husband has anything to say with it,” she added with a laugh and wink.

Monaghan’s long been a cheerleader of Altuzarra, attending his fall 2015 show during New York Fashion Week and wearing the designer to the Napa Valley Film Festival, the Annual FGI Night of Stars, and the 2014 Met Gala. In fact, his was the only show she attended this past fashion week, taking a break from filming her latest project, Hulu’s first drama series called “The Path.”

In some respects, she’s representative of a shift in Hollywood as actors move from film — Monaghan was a high-profile supporting player in blockbusters such as “Mission Impossible 3” — to prestige cable — the first season of “True Detective” — and now to one of the fledgling digital upstarts.

“These networks — whether it’s HBO, Showtime, Hulu or Amazon — I mean they’re really pushing the envelope,” she said. “You look at studio films nowadays and the slates are so much smaller, and independent films are always something that I love but are really hard to get made, not only to make, but [to get] distribution. And for anyone creative in Hollywood, whether you’re a director, a writer or an actor, it’s just another medium to be able to work in.”

Sunday night’s Emmy Awards offered more proof of a changing of the guard in television. Though HBO dominated, Netflix and Amazon made further inroads with big awards for Uzo Aduba of “Orange is the New Black” and Jeffrey Tambor of “Transparent,” respectively.

For Monaghan, awards shows are more than just about doling out prizes though. “I started watching [the Emmys], of course, for the red carpet because it’s something I love to do with my daughter,” she said. “We love to look at the dresses and that’s sort of my favorite part of it.”

Her best dressed picks were Jaimie Alexander in Armani Privé, Kerry Washington in Marc Jacobs and Claire Danes in Prada. As for her daughter? It was a no-brainer. “She loved Elisabeth Moss with the pink dress and she loved Giuliana Rancic’s dress, it was a pink dress that had lots of beading on it,” Monaghan said. “So…pink!”