Joseph Altuzarra Celebrates the Holidays With His Support System

The designer invited a small group of friends to Vinatta Project for a holiday party. 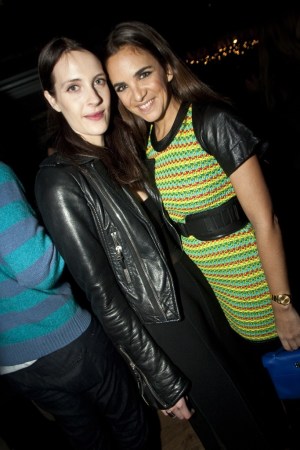 The sign outside 69 Gansevoort Street in Manhattan on Wednesday night read “R&L Restaurant” in the loopy metallic script characteristic of Chinatown eateries with laminated picture-filled menus, but inside was something entirely new, the recently opened Vinatta Project. Roughly hewn wooden paneling cozied up to dulled black patent leather booths and a zinc topped bar near an Enomatic machine against one wall, where Joseph Altuzarra, who was hosting the holiday party at hand, stood. An intimate dinner had seemed just the thing to get in the holiday spirit for the designer and a close group of what he referred to as his “support system.” Vanessa Traina had her arm looped behind Altuzarra’s back for most of the cocktail hour, despite her decision to wear Balenciaga.

“I’m not a brand ambassador. Just a friend,” Traina said.

This story first appeared in the December 16, 2011 issue of WWD. Subscribe Today.

“Is it bad that I’m all the way back here near the tables?” Altuzarra asked. It was decided that it wasn’t. “I’ll let people trickle in this way, they’ll have to sit some time,” he mused, grinning at his boyfriend when the pair discussed their plans for the holiday: Paris and then Miami together for some sun around New Year’s.

“I remember this place when it was Florent,” Aaron Young said. “Years ago, when we’d go out for dinner at 2 a.m. and then go ‘out’ after. You could stay here until 4 a.m.”

The artist sighed faux-dramatically: “Oh, those were the days.”

“I know, my husband was like ‘Where are you going?’” she said, cocking an eyebrow with a feigned look of suspicion.

“This is so nice,” Santo Domingo continued, pausing to say goodbye to a friend who had to slip out to another obligation. “Go, go,” she laughed. “‘Tis the season for an impossible amount of holiday parties.