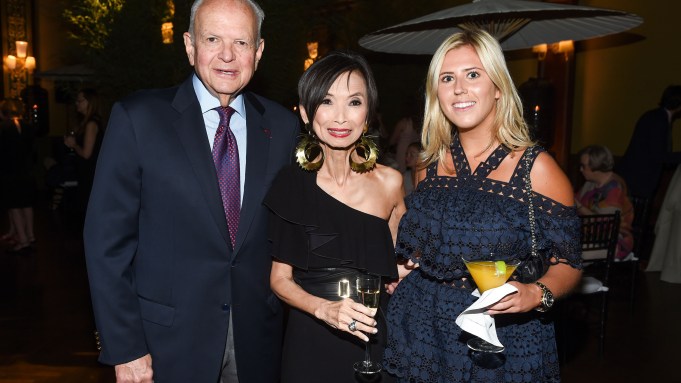 After a yearlong debate about throwing a party for her company’s 40th anniversary, Josie Natori was eventually swayed by a friend. “She said, ‘If you can last 40 years in this business, you deserve to have a drink,’” Natori told guests at Tuesday night’s celebration at the Prince George Ballroom.

Thanking the crowd, Natori singled out two mentors — her former dean Elizabeth McCormack, who “at Manhattanville [College] said women can be anything they want in life,” and from her pre-fashion days as Merrill Lynch’s first female vice president in investment banking, Joe Ford made the trip from Little Rock. The faintly tropical, leafy decor was created by another confidante, David Monn, whom Natori actually urged to go into party planning, hiring him for an outdoor birthday party for her husband nearly 20 years ago.

Tansky, who jokingly introduced himself as “I’m Burt with nobody,” recalled becoming the first retailer to pick up Natori’s collection during his Saks Fifth Avenue days. “In 1977 when she came [to Saks] with her lingerie, it was just right. It looked right. It was perfect. It fit in with the school of things. I can remember vividly how much that we liked what we saw and started,” he said.

The retail veteran attributed Natori’s success to “creativity, sensitivity, an intense feeling for the merchandise and the aesthetics. She just has a great sense of style over the years that’s evolved and evolved.”

The designer’s Wall Street background wasn’t the only strong point that has helped Natori succeed, according to Lundgren. “You can tell just from the video and just from knowing her, how determined she is. She is going to be successful.”

Glancing at the scene, the Macy’s chairman said, “I’ve run into 30 people — some I haven’t seen in five years or 10 years. She just has an ability to bring everybody together. She just makes you feel like you’re in such a conversation with her no matter who is around you or her. She really has that great ability to bring you in. I think that’s why people are loyal to her as a person, not just as a company.”

Traces of the designer’s steely work ethic were also mentioned during the Tim Braun-shot short film that was screened during the cocktail party. The designer thinks nothing of coming straight to her Midtown office for a full-day’s work after one of her monthly trips to the Philippines factory. Committed to her homeland, the Philippines-born Natori said workers there take an artistic approach considering one simple nightgown shirt can pass through 20 hands. That was one of the asides guests gleaned from the short film. “I don’t have any regrets. It’s important to make mistakes because from there you get stronger. Every line connects and I think you learn from every step of the way,” Natori said in the film.

Arnold chalked up Natori’s staying power to “tenacity, always looking ahead, never looking behind and making opportunity out of adversity. And 40 years later, she’s still doing it. To be a woman in this business and to own your own business is no small feat. It’s a testament to her fortitude.”

McCormack, her college dean from decades past, said Natori’s drive hasn’t waned. “Whatever Josie does she gives every bit of her energy and great mind. She was a great student because that was what college was about. And she is as determined to be a good student today,” McCormack said.

Later in the evening, Natori indicated she will be running full steam ahead to more milestones in business. “My mother is 93. Good genes. I’m going for 70” years in business.