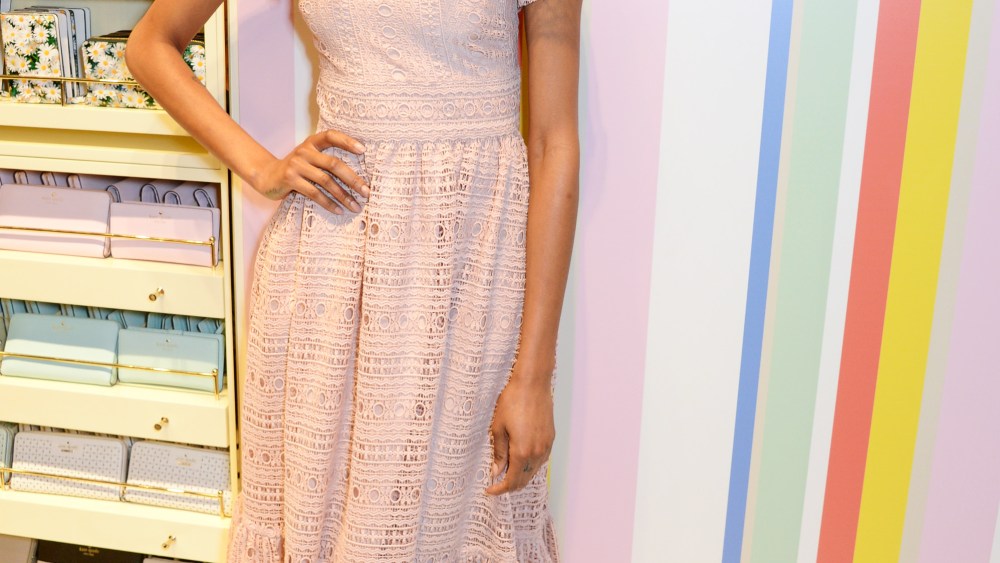 “It was a really fun shoot and I love how Kate Spade celebrates cool, interesting women,” Dunn told WWD. “Shooting with Iris Apfel was a dream, she has such an open attitude and she was definitely the highlight of the shoot.”

The model, who recently launched a children’s wear collection with British high-street retailer Marks & Spencer, said she is looking into the possibility of publishing her own cookbook. “I just had a meeting this afternoon about doing my own cookbook,” she added. “So that is really exciting. Food is a really big passion for me, so just to have a conversation about the possibility of having my own book is a dream come true.”

Meanwhile Harris, who was wearing a neon pink Kate Spade New York minidress, had just come back from New York where she was filming “Collateral Damage” with Will Smith. “They chose such great timing for the opening of the store,” she told WWD. “There’s so much color, such vibrancy that you can feel like it’s spring when you walk in.”

Hundreds of passersby crowded outside to see the live food performance “Sweet Suites” by artist Jennifer Rubell, who took over the store’s street-facing windows for the night. The windows were made to look like a polished hotel suite, while guests inside the store were chosen at random and given a special key, inviting them to join Rubell.

Once they stepped into the “suite” they lounged on a bed facing the window while Rubell unlocked their treat, which ranged from Kate Spade New York products to traditional American and British sweets.

Deborah Lloyd, the brand’s president and chief creative officer, was among the first to join the performance. “We’ve worked with Jennifer in the past when we opened a big store in Hong Kong. We loved what she did and we are fans of her art, so we wanted to also do something here,” Lloyd told WWD. “A juxtaposition between New York and London felt right, so we made it about the different desserts that you are served in the two different countries. Living in New York and coming back to London I am loving my London desserts.”

Lloyd also added that this was a long-awaited celebration. “We’ve been looking for a store in Regent Street for a long time, but they say the best things are worth waiting for. It’s a really lovely expression of the brand and we are happy to bring some extra categories that we have never had in our U.K. stores before, like our new furniture collection and our children’s wear collection.”

The store aims to increase the brand’s exposure in the U.K. By allowing people to see the whole breadth of Kate Spade products and how all the different categories come together.

“I think people are getting to know us, they’ve been loving discovering the stationary and our new London pieces. I think as it all comes together under one roof it tells a good story,” Lloyd said.