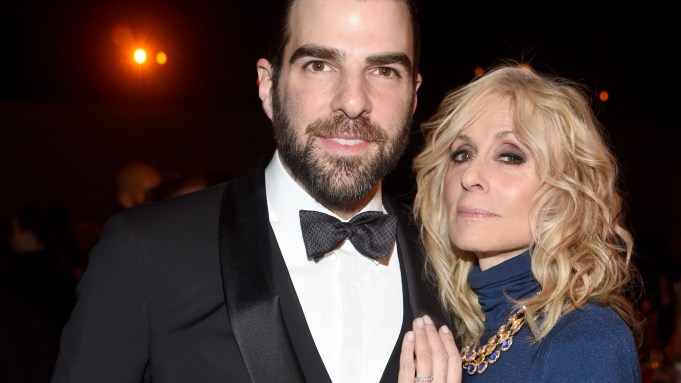 A “jewel box” isn’t the first thing that comes to mind when you think of the 69th Regiment Armory. But on Wednesday night, the phrase was an accurate description of the space, where ACRIA held its annual holiday dinner.

“We don’t do the hotel ballroom thing,” said Benjamin Bashein, executive director of the foundation. ACRIA used to hold the dinner in a different artist’s loft every year. As it grew, the event moved to Donna Karan’s studio, where it stayed for 10 years until 2014. Now, ACRIA looks for spaces in which to re-create the lived-in feeling of an artist’s loft while comfortably holding 450 guests.

“This year, we took inspiration from [Robert] Mapplethorpe — the flowers, not the S&M — and worked really closely with Putnam & Putnam, who we’ve used for two years now,” Bashein continued. “Together we created what I think is an extraordinary little world. We embrace the raw, minimal, industrial nature of the space and then make this little jewel box in it for people to celebrate.”

“I saw my friends were dying,” the actress said. “I saw that the country that was to my mind such a compassionate country was incredibly divisive, without compassion and was literally letting my friends die because there was such a hotbed of homophobia underneath what was really going on. I saw that this was happening and I looked at somebody like Elizabeth Taylor and I said, ‘She is standing up for the LGBTQ community. She is standing up for her friend Rock Hudson and I want to be like that.'”

Zachary Quinto sat next to Light at dinner before presenting her with the award. In her speech, Light reiterated how much of an influence the late Taylor had on her activism, while also addressing the current political climate.

“When the government, our government, gave virtually nothing to those who were suffering at the height of the pandemic, it appallingly revealed the dark underbelly of this country,” Light said. “But in the face of that darkness, LGBTQ perhaps for the first time became a real community and lead where there was no leadership. They found a new way of operating and demonstrating a new form of courage.

“It is that same spirit that is needed now as much as it was in those early days of AIDS,” she continued, calling upon the LGBTQ community to be an outspoken force against hatred and bigotry. “It’s time once again to lead, to be empowered, to use people like Elizabeth Taylor as a role model. And wherever our dear Elizabeth resides in all her glory, we will always remember how she stood like a tree, steadfast, bending with the current and yet always holding her ground no matter what the forces were that came at her. In closing, I would like to say that there is nothing more important to me than living an authentic life.”