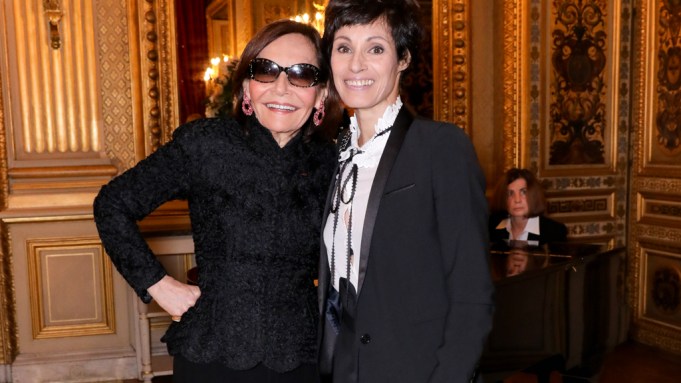 PARIS — Having brought together leading jewelers for her previous gala events in Paris, Judith Price set about uniting the arts with a stately dinner held at the French Foreign Ministry on Monday night.

An eclectic crowd of creative professionals, including director Jean-Jacques Annaud, singer Alain Chamfort and jeweler Lorenz Bäumer, gathered in the ornate reception rooms of the Quai d’Orsay for the gala dinner hosted by Price, president of the U.S. National Jewelry Institute, in honor of the French Academy of Fine Arts.

Before sitting down to dinner, attendees toured the upstairs reception rooms of the 19th-century building, where one cheeky guest posed for a selfie in the gold mosaic bathtub of an Art Deco bathroom built in 1938 for the visit of Britain’s King George VI and Queen Elizabeth.

Held in the imposing main dining hall, the dinner was concocted by Michelin-starred chef Arnaud Faye and ended with strawberry desserts served on blocks of carved ice containing flashing lights.

“Over the last few centuries, the influence of the Academy of Fine Arts has turned France into a worldwide center for arts and culture,” Price said, addressing guests in French.

The institution, attached to the prestigious Institut de France, represents fields including painting, sculpture, music, film, photography and architecture, and even counts Pierre Cardin among its members.

Its president, composer and conductor Laurent Petitgirard, noted the presence of Marie-Claude Pietragalla wasn’t a coincidence: the French government just approved adding choreography to the list of the academy’s artistic disciplines, and the first members from the world of dance will be voted in next year.

“There’s only one problem with the Academy of Fine Arts, and that is the word ‘academy,’ which can suggest the term ‘academic.’ In fact, the very opposite is true. To tell you the truth, I am the permanent secretary of a bunch of lunatics,” he told the gathering.

Petitgirard had just returned from Poland, where he premiered his latest opera, “Guru,” in Szczecin. It stars his wife, actress Sonia Petrovna, in a speaking role. “It’s an opera about mental manipulation resulting in collective suicide, since everyone dies at the end, except for her. I mean, I wasn’t going to kill my wife,” he told WWD.

“I was very happy that she suggested this, especially since the work of the members of the Academy of Fine Arts is often less well-known in France than overseas, so this is a good opportunity to underline that,” Petitgirard said.

One successful French cultural export is Annaud, whose film career — including classics such as “The Name of the Rose,” “The Lover” and “Seven Years in Tibet” — has taken him to countries including China, Tunisia and Cambodia.

“It’s vital,” he said. “On a basic level, I could not make movies of this scale if I didn’t have an international audience. Ever since film school, I have always thought of cinema as a global art. I don’t think cinema can thrive if it doesn’t cross borders.”

Annaud recently completed his first television miniseries, an adaptation of Joël Dicker’s best-selling novel “The Truth About the Harry Quebert Affair” starring Patrick Dempsey. The series premiered on Sky Witness in the United Kingdom last month and is set to screen in Australia, France and the United States next.

He welcomed the opportunity to mingle with fellow creatives. “I only ever meet actors, screenwriters or composers, but I don’t often get to see painters, architects or choreographers,” he noted. “This way, I get to have conversations that allow me to talk and think about the artistic output of other disciplines, and that’s marvelous.”