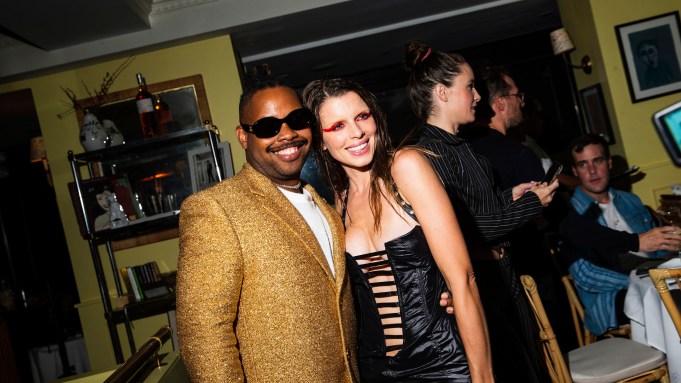 “It’s like Studio 54!” said Kendall Werts of his party Tuesday evening, and while that’s a lofty claim to make, the talent rep wasn’t all that far off. New York Fashion Week is still technically a few days shy of commencing but as is typical, the parties are spilling over into the days before and after, and Werts kicked things off Tuesday with a fifth-anniversary party for his talent agency The Jeffries, held at American Bar in Greenwich Village.

Werts certainly knows how to throw a party: Dressed in a shimmering gold top coat and black Celine sunglasses, the host was nonstop on the go working the room, cozying up to his clients Evan Mock and Julia Fox and dancing with each table of guests.

Guests included Mock, Fox, Kailand Morris, Ella Emhoff, Wolfgang Tillmans, Richie Shazam, Zión Moreno, Eli Brown, Ivy Getty, Teddy Quinlivan and more, who slung back espresso martinis and oysters as music pumped through the restaurant. The whole night had a first-party-of-the-school-year feel, everyone seemingly elated to see each other, dance, cheer, and even make out in the middle of the party.

Werts is most looking forward to the Tom Ford show this NYFW, where his client Mock will be in attendance.

“He will not disappoint,” Werts said of Ford. “The man understands the idea of what a star is and how his selected stars should shine.”

Otherwise, Werts is keeping a light NYFW schedule, deputizing his staff to do the running around while he rests up for “where the real money is at” — Paris. Don’t tell that to Mr. Ford.