Although the parties are a whirlwind, some of the biggest stars plan to take a slower approach come Sunday. 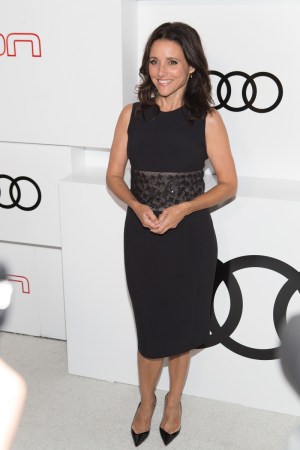 “Salem” star Ashley Madekwe agreed. “Yes, I love this party and I do like freaking out when I see my actors that I love. I saw Olivia Pope’s dad [actor Joe Morton] two years ago and I told him that I was obsessed. I was like, ‘Excuse me, I think you’re amazing, you’re so wonderful.’ He didn’t reply; I think he thought I was coming on to him.”

Although the parties are a whirlwind, some of the biggest stars plan to take a slower approach come Sunday. “I’ll hit the farmer’s market real quick and try to take it easy because it’s a really big day,” said Louis-Dreyfus. Khandi Alexander, a double nominee for “Bessie” and her work on “Scandal,” asked, “Is it Thursday? It’s been two weeks of nonstop, so I’m just going to wake up and take it as it goes. It happens so fast that I just breathe and go, ‘OK, another fabulous day, more great makeup, lovely people, breathe and let’s go.’”

The Sunday script will be slightly different for her “Scandal” costar Tony Goldwyn. “I have to work at 5 a.m. the next day, so I’ll make dinner for my daughter and watch the Emmys on the couch with her,” he said. Madekwe said, “I’ll watch with Cheetos and my cat on the couch. It’s not a party if your fingers aren’t covered in orange.”