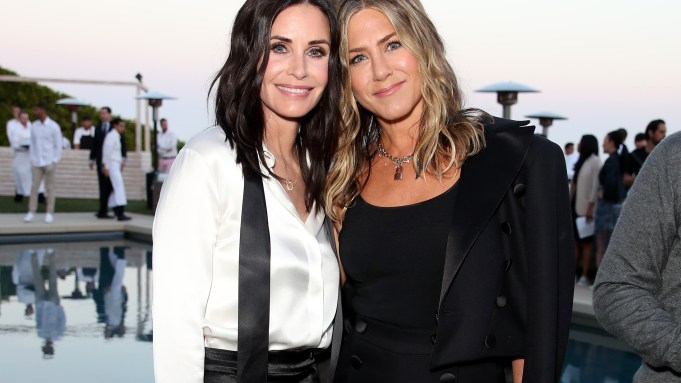 “You want me to work the jacket?”

Jennifer Aniston is no novice to a press line. And when said jacket is Chanel, working it seems only right, no?

The actor gamely played along for photographers Saturday night as she walked the blue carpet with Courteney Cox; the two were in attendance for Chanel’s Natural Resources Defense Council dinner. “Come over here!” Aniston beckoned to Cox.

Julia Roberts, Priyanka Chopra and Leslie Mann were among the Chanel-clad guests who came out for the evening, held at Kelly and Ron Meyer’s Malibu home. The dinner benefited the nonprofit environmental organization’s work protecting the world’s natural resources. Per the invitation, the event was particularly focused on preserving “our majestic oceans.” However, with Chanel partnering with NRDC for the affair, the environmentally conscious night also made for a good fashion moment.

Roberts and her husband Danny Moder made a more discrete entrance. The two bypassed the carpet altogether by ducking behind photographers and reporters who remained focused on those posing for the shutterbugs.

Judd Apatow had a similar plan. The director/writer/producer stood behind reporters as his wife Mann and their two teenage daughters, Maude and Iris, struck a pose on the arrivals line. When prompted to join them, he said, “I don’t want to ruin their look.”

Mann said she was excited to have a night out with her fam since their neighborhood outings usually consist of coffee trips to the Brentwood Country Mart. “Who wouldn’t want to hang out with them?” Mann said. “Look how cute they are. We got ready together. We all crowded into a room and got hair and makeup done and then got dressed together.”

Did they coordinate their looks? “I ask their opinions and they ask mine,” Mann said. “Iris doesn’t really care what I have to say. Maude does a little more than Iris. And then I care what both of them have to say — that’s usually how it works.”

Andie MacDowell’s daughters Rainey and Margaret Qualley also made it a family affair — though their commute proved a tad longer. “It was quite a drive,” Rainey admitted. “My sister and I live in Echo Park, so it took a while to get here. We live together, so we got ready together and we came over together. We had our fitting together too, so we helped each other pick out what we were going to wear.” The 28-year-old chose her blue and green tweed dress based on its cut and color. “I loved that it kind of reminded me of the ocean,” she said, “which I thought was fitting for the event.”

Elizabeth Hammer also considered the cause when deciding what to wear. “I like to coordinate the invitation to the dress,” she said of channeling the ocean in a navy and ecru printed muslin dress from the label. “I feel like with Chanel, it’s always so easy to go for a classic and beautiful and more tailored look, but I always do look at the invitation and go with the vibe, so going to Malibu for a beautiful summer evening, you kind of have to go with the flow.”

Hammer’s actor husband, Armie Hammer, was unable to attend. “We’re like nonstop,” she said of their travel schedules. “It makes your kids really adaptable. Our daughter has been on 230 flights and she’s only three. She’s been to Europe, like, 16 times. At one point, you’re like, ‘Is this bad? Is it too much?’ But it’s great life experience. My husband always says, ‘She’s going to be the annoying person in fourth grade that’s like, ‘I really prefer Paris in the summer.’ I’m like, ‘She can’t become that.’ But no, no. We’ll teach her to appreciate everywhere she goes.”

Rosanna Arquette arrived straight from the airport herself, but the Malibu resident was eager to attend in the name of the NRDC. “We’re here to celebrate and raise money for Mother Earth,” she said. “The NRDC does incredible work all around our world and country — especially now focusing on the fact that it’s hard to breathe, it’s hard to drink water, it’s hard to swim in oceans without plastic. We all need to be responsible and take care of it. This is how we survive and if we don’t, we’re going to perish.” She added, “I’ve always been an ocean girl. I was a dolphin [in a past life].”

Meanwhile, longtime NRDC supporters Pierce Brosnan and his wife Keely Shaye Smith were still reeling from the fact that Brosnan’s painting of Bob Dylan recently sold during the Cannes Film Festival for $1.4 million. “It was a magical night,” Brosnan said. “It was for a worthy cause — for amfAR and for a cure for AIDS. I was gobsmacked to get such a price for the painting. I’ve been an enthusiastic painter for many years — since ’87 and my wife has curated the work and we’re talking about putting a show on in Paris.” While he’s created around 153 pieces, he plans to whittle it down to 20 to 30 for the show. “It definitely takes some courage to do it, but if I can go out and sing in ‘Mamma Mia,’ then I can show a few paintings.”

Naturally, Chopra’s attendance prompted more than a few guests to inquire how she enjoyed the Royal Wedding. “It was great,” she cooed as she headed inside to where King Princess crooned onstage. While overlooking a breathtaking view of the Pacific Ocean, Roberts caught up with Cox; jewelry designer Jennifer Meyer chatted with Aniston, and Mandy Moore kept close to fiancé Taylor Goldsmith. The sound of waves crashed in the background as guests enjoyed a taco bar, crudité and pizzettas.

Following Marley, Snoop Dogg jumped on stage to perform hits “Nothin’ but a G Thang” and “Drop It Like It’s Hot. “Shout out to the ladies in the crowd,” Snoop Dogg called out as Roberts and her husband sat together on a cozy lounge chair bobbing their heads to the music. “Hope ya’ll are having a good time tonight,” the rapper continued, “because I’m having a real good time.”