Two days earlier, she had picked up a Golden Globe for best actress in a drama. 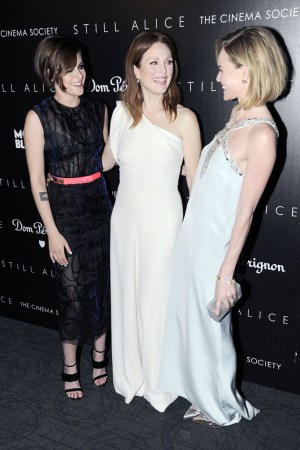 At a Tuesday night screening of “Still Alice,” Julianne Moore was visibly exuberant and she had reason to be. By then, she was the closest thing to a lock in the race for one of the best actress nominations to be revealed Thursday morning by the Academy Awards. Two days earlier, she had picked up a Golden Globe for best actress in a drama, the culmination of months of acclaim following the premiere of the movie in September at the Toronto International Film Festival, where she had also screened her other awards-bait this year, a supporting role in David Cronenberg’s “Maps to the Stars.”

“We are so lucky, so lucky,” Moore said, still seemingly overwhelmed by the film’s string of good luck.

Based on a novel by Lisa Genova about an academic’s struggles with early onset Alzheimer’s disease, “Still Alice,” which opens nationally Friday, was made on a shoestring budget and lacked the marketing muscle to campaign for awards consideration as vigorously as some of Moore’s competitors. When it made its debut in Toronto, distribution wasn’t even guaranteed. “We all sat on our hands thinking, ‘Is somebody going to pick this up? I hope so,’” Moore continued. Eventually, Sony Pictures Classics did and has seen it cruise the hard-fought awards season on a wave of goodwill, which was reflected in the turnout at the Cinema Society, Dom Pérignon and Montblanc screening — Sting and Trudie Styler, Paul Sorvino, Bridget Moynahan, Prabal Gurung and Gilles Mendel were among those present to cheer on the actress.

“Listen, this is the type of film that’s hard to make, much less be seen by anybody,” said Kate Bosworth, who plays one of Moore’s daughters along with Kristen Stewart. “I’m so, so pleased for Julie,” Bosworth continued, noting that she had skipped the Globes and stayed in New York. “I was watching on TV, and then they called her name. I was jumping up and down in my hotel room. She’s so deserving.”

Director Wash Westmoreland was equally effusive about his leading lady. “I think Julie was absolutely at the top of her game and everybody knew that from day one. The other night, Julianne said, ‘Can you believe it?’ I said, ‘This isn’t a dream, this is really happening,’ ” he said, quoting “Rosemary’s Baby.” “As a filmmaker, you live in a fantasy world. In this occasion, reality has really upped fantasy. It’s actually better than what we dreamed of.”

For Moore, who is going for her fifth nomination, the role of Alice Howland is the result of four months of intense research, interviewing doctors, patients and support groups to better channel the experience of her character.

“I think it’s very unusual that you see a disease like this portrayed completely subjectively,” she said. “This was really about what it feels like. It takes you through the journey through this disease with the person who’s dealing with it.” It’s the kind of commitment the actress has become famous for after intense performances in such movies as “The End of the Affair” and “Far From Heaven,” and it may just finally deliver her that elusive Oscar.