Moore wore a Hugo Boss creation by Jason Wu for the red carpet. 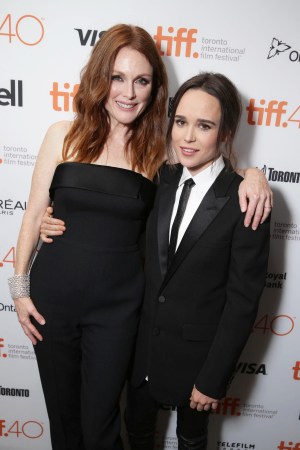 Moore wore a custom Hugo Boss creation courtesy of Jason Wu at both the party and the film’s premiere later that night. As she walked the carpet, the actress said what she liked most about the black strapless jumpsuit was that it featured pants. “I love it,” she added. “It’s really comfortable. I thought it was cool.”

Earlier in the week, she told WWD that while a lot of discussion goes into what she wears, she and her stylist Leslie Fremar’s philosophy is actually quite simple: “We just pick outfits that we like. Before every festival, we have a fitting and we go through everything.”

As for the film itself, Moore said the subject matter resonated with her. “It’s personal and universal, but it’s also an incredible civil rights story,” she said of the biopic, which follows New Jersey State Police lieutenant Laurel Hester and her domestic partner’s battle to secure pension benefits after a terminal cancer diagnosis. She said the story, at its core, is about love. “Everyone loves a love story. Who we love and how much we love them and how we build our lives around them — that’s an essential story in everybody’s life.”

Page stars as Moore’s partner in the film, but she was also a producer on the project alongside her manager, ID-PR founder Kelly Bush Novak. “It feels really special to be here and to know that Stacie [Andree] is here tonight,” said Page, referencing the real-life character she plays in the film. Page’s girlfriend Samantha Thomas was also on hand for the occasion. The two held hands on the red carpet before heading inside—a move inspired by the film’s subjects. “These are two women who are so inspiring who did something so important, so brave in a time of unimaginable difficulty and sadness. I feel so fortunate to be a small part of telling their story,” said Page.

Of working with Page, Moore said, “I adore her. We hadn’t met or worked together before. She comes toward everything with so much sensitivity and openness and honesty and a willingness to engage. She was a true partner to me on screen and off. We became friends,” she said. “My favorite scene in the whole movie is the scene where we dance and we fall in love.”