Sandra Bullock cut out early to go home to her son. 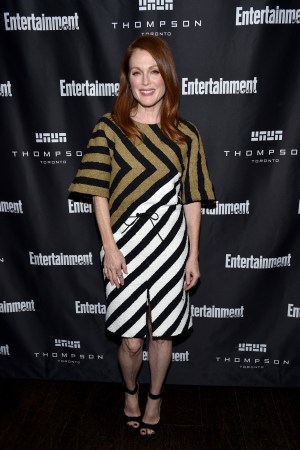 For many stars, one annual stop on the Toronto Film Festival party circuit is Entertainment Weekly’s “The Must List” party, held at The Thompson Hotel on Saturday afternoon. This year, the event drew Matt Damon, Bryan Cranston, Julianne Nicholson, Tom Hiddleston, Elizabeth Olsen, Jeff Daniels, and Joel Edgerton, among others.

Brie Larson, fresh off Telluride Film Festival buzz for her work in “Room,” asked her flak, “Did I do it right?” after posing on the red carpet. After being given a nod of approval, she exclaimed triumphantly, “Fashion!” She better get used to it. Many are already predicting Best Actress nominations for her performance, though she’s taking the feedback in stride. “It takes a little bit of time, I think, for any of this to really seep in as being real or lasting, but every day it seems to feel a little more real and a little more lasting,” said Larson. “I’m just excited for more people to see the movie. So far the reaction has been really beautiful.”

Some had already worked the TIFF scene plenty, like Emily Blunt, who attended to promote “Sicario.” “I want to take my high heels off, for sure. Maybe if I wear some sneakers, I can let loose a bit,” said Blunt. Others, like Julianne Moore, were just getting started. “I love Toronto,” said Moore, whose film “Freeheld” debuts Sunday night (her Oscar-winning performance in “Still Alice” premiered here last year). The actress noted that her first festival “was in, like, 1993. I’ve worked here a ton and I love the community. I love the audiences.” Does she actually have a chance to see any of the films? “Not anymore. As the festival has become bigger, they fill up a lot of time with press, so you get up in the morning and you do press all day and then you go to your screenings.”

While the ‘fest was just heating up for some, others were on their way out. “I’m going home to my son,” Sandra Bullock said, adding that, while her trip had been enjoyable, the red carpet’s glamor can, at times, be a case of smoke and mirrors. “It’s our job to make it look like glitz. This is why it’s entertainment. We’re not curing cancer, so we’re supposed to make it look sparkly. If you can have a good time, have a good time.”